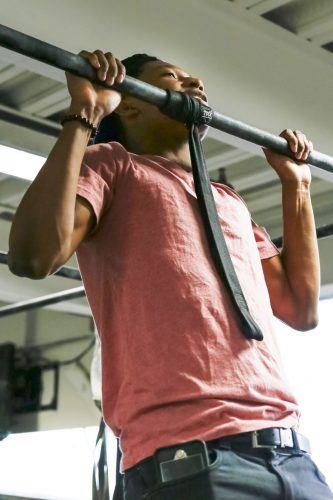 Freshman computer science major Chance Griffith goes to the gym often in order to stay in shape; because he ran cross country in high school, he said it’s fairly easy for him and has become part of his regular routine. Griffith said he has not experienced the freshman 15 weight gain myth. / photo by Cierra Boess

The “freshman 15” is the 15 pounds freshman are expected to gain – in theory or reality – in college due to stress, dining hall food, drinking and lack of exercise. Students here, however, debate whether it’s really a thing.

In a recent informal survey, 15 freshman were asked to weigh in on it.

Ten said they believe the weight gain is real, two said they do not and three didn’t know. Six of those surveyed said they actually gained 15 pounds freshman year.

Despite not gaining the 15 pounds himself, freshman computer science major Dylan Villanueva said he still believes the freshman 15 is real.

Isaac Gomez, freshman business administration major, said that although he eats healthy most of the time, he only exercises about one time a week and has gained the freshman 15.

“There’s a lack of nutrition structure that comes with being independent,” freshman psychology major Jamie Finegan said. “The main reason people gain the freshman 15 is because you get to college and you start drinking beer and partying.”

Freshman sociology major Briana Villarreal said the freshman 15 is not inevitable, but rather an excuse to not take care of oneself.

“People … see it as normal to gain 15 pounds, so they eat unhealthy,” Villareal said.

“It depends on the person and whether they know how to control themselves,” Zanteson said. “Some people don’t have self control, so they learn it over time.”

Freshman computer science major Jussy Bi said many students gain the freshman 15 because they eat out of boredom rather than to maintain their health.

“Usually when you have classes all day and there’s a gap where you have nothing to do, you search for food,” Bi said.

Freshman chemistry major Itzel Jauregui, who commutes to ULV, attributed the freshman 15 to the lack of affordable healthy options off-campus.

Three students said they believe students who live on campus are more susceptible to the freshman 15.

“I think dormers gain it because they have the meal passes,” freshman kinesiology major Sabrina Hernandez said. “For us commuters, we have what we can make from home.”

In a 2008 study of 131 students who live on campus in at private colleges, the Journal of American College Health found the average weight gain after the first year of college was 2.7 pounds.

Half of students gained weight and 15 percent lost weight with men gaining more than women, the study found.

“(Still) people who dorm can eat all they want, three times a day, every day of the week,” said Freshman business administration major Evan Monterroso. Monterroso, a water polo player, said he eats healthy about half the time, but works out four to five times a week.

“In my experience, the freshman 15 only applies to people who don’t play sports,” Monterroso said.

Jauregui added: “In my spare time or when I’m not studying, I go to the gym and get 30 minutes of cardio. I drink water all day and before I go to bed.”

Other students said that they naturally did not gain weight during their freshman year.

“I’ve seen it happen to other people, but I haven’t gained… It’s just my metabolism,” freshman Karla Lucarelli said.

Freshman math major Taylor Francis said she did not gain the freshman 15 because of her eating habits.

“I actually like healthy food and I enjoy eating it because it makes me feel better,” Francis said.