By Campus Times Editorial Board on May 19, 2017 in Editorials, Opinions 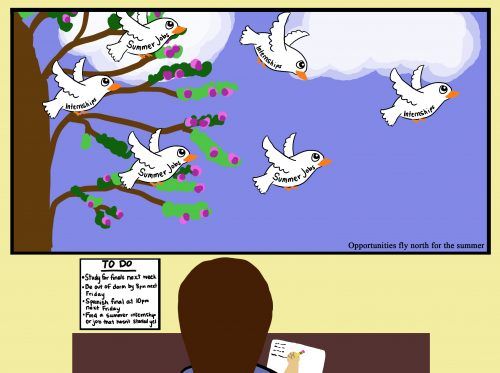 The University of La Verne currently offers two 16 week semesters and a winter term in January known as “Jan Term” for the academic year. Most universities like Chapman University, UC Berkeley and the Pomona Colleges that are on a semester system offer 15 week semesters instead.

College is about competition; since the beginning we compete to attend the best schools, then we compete for the best internships and we compete for jobs after graduation. By ending its school year later than most universities, ULV is putting its students in a competitive disadvantage.

The University of Southern California finished its spring semester last week, which gives their students a full two weeks’ advantage to begin jobs and internships.

“It will provide for greater flexibility in scheduling, expand classroom availability, provide for a 90 minute ‘black out’ time block on Tuesdays and Thursdays for what Student Affairs calls ‘community time’ for students to participate in both non-academic and academic activities,” Provost and Vice President for Academic Affairs in 2009 Alden Reimonenq said in an email statement released to campus in February 2009.

In an article titled Impact of Course Length on Student Learning by Adrian M. Austin and Leland Gustafson in the Journal of Economics and Finance Education in 2006 found that, “After controlling for student demographics and other characteristics, intensive courses do result in higher grades than traditional 16-week semester length courses.”

Guillermo Lechuga, a senior business administration major at the University of La Verne said, “If we had a shorter semester, deadlines would be tighter so it would have forced me to make time for my assignments and in return the quality of my work would be better.”

The University tries to compete with larger institutions with big endowments by highlighting our small classroom size and one on one connections you make with professors.

By not switching to a 15-week semester, it is shooting itself in the foot when competing for students to choose La Verne over a larger university.

Students show off science projects
The Road to Recovery: Sports culture pressures male athletes to put it all on the line to win