By Michael Savall, Miguel Fernandez on May 5, 2017 in Community News, News 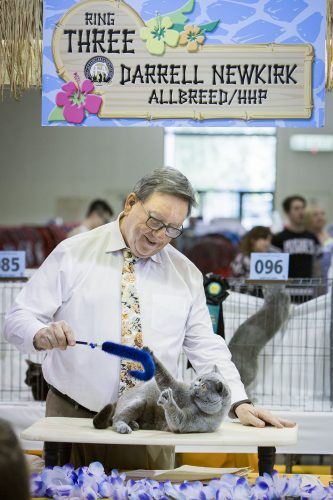 The Santa Monica Cat Club sponsored the “Tiki Cats at the Fair” cat show at the Fairplex last weekend. Cats purred as their owners groomed and prepared them for a tough show with about 150 cats in attendance.

Cat owners from different parts of California arrived at the event to showcase their cats and gain points and ribbons for their feline friends. Points were accumulated throughout what several cat enthusiasts would call the cat show year.

The Cat Fanciers’ Association, the organization that credits and approves the judges for these international competitions, has been registering cats based on breed and category since 1909.

Within the competitions, cats are categorized as kitten, championship, premiership and house bred.

Championship level cats are whole cats or not spayed or neutered, while premiership cats are fixed. Exhibitors can enter their cats into shows across the United States to gain champion titles. CFA approved judge from Washington, Wendy Heidt, who specializes in judging longhaired cats.

“We are region five, which covers California, Arizona and Southern Nevada,” Heidt said.

“Some exhibitors even come from other states to show off their cats or others travel all over.”

Five different judges were present at the show.

Each judge had their own ring in which they judged cats based specifically on their category. Different times were given to judges and for community members to watch and participate in each event.

Many show exhibitors have been participating in cat shows for years, and their cats gain internationally recognized titles.

Cat enthusiast Allison Clark from Glendora has been showcasing for three years. Cats were never her pets of choice until she rescued one that changed her mind completely.

“I have four cats now, but I only show my cat Otto,” Clark said. “I think it’s great to be able to have a cat and have fun with it.”

Clark said she only shows her cat Otto because her others were introduced to the show and reacted negatively.

Many vendors came out to exhibit their products. Most of the vendors were home based and manufacture all of the products by hand, selling cat toys and accessories, clothing, and even cat inspired jewelry.

With the large number of attendants, a small organization sought the perfect opportunity to spread awareness of their mission.

A Hope to Home for cats is a small non-profit located in Yuciapa that created a sanctuary for cats who need to be adopted.

President of the organization Marita Rutledge attends different events 30-35 weekends in the year to spread awareness about her organization.

“We hope to adopt some of our cats everywhere we go,” Rutledge said. “We want all of them to eventually find a loving home.”

The cat year renews itself every May, which means as of next week, all show cats will start with a fresh slate and compete for new and greater titles.