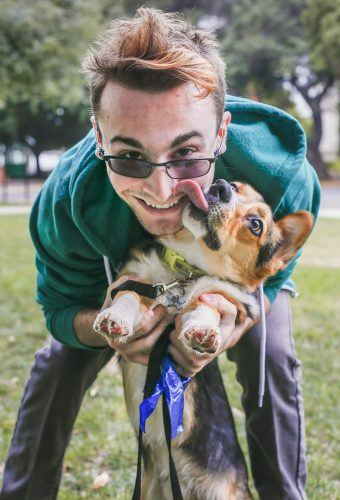 Junior computer science major Sean Gribbin plays with his year and a half old corgi Bruce in Sneaky Park. Gribbin said he hoped a a puppy would help fight his depression. He met Bruce through a corgi breeder in San Diego and said he bonded quickly with the runt of the litter. / photo by Cierra Boess

Senior speech communications major Blasina Hernandez walks around campus with a kitten named Cleo to her chest that just fits in the palms of her hands. Hernandez rescued Cleo last weekend from a heating vent in a house that her dad was doing construction on.

“She was probably stuck there her whole life because there were three cats there and only one could move – she couldn’t,” Hernandez said.

At one month old, Cleo’s underdevelopment is clear; she walks very slow and still has shaky coordination. The first couple of days, it was difficult to get Cleo to eat, although she would continuously cry of hunger.

Hernandez discovered that she had to mix 2 percent milk with whipping cream to resemble the sweetness of a cat’s breastmilk, egg yolk for protein and water to dilute the mixture in order for Cleo to eat and receive necessary nutrients.

“She looks at me like a mom, she follows me around and cries when I leave, especially because she was alone with only her siblings in a vent since she was born,” Hernandez said.

Hernandez is currently searching for a home for Cleo where she will be able to be watched closely and fed every three hours.

Junior biology major Andres Pulgarin has four dogs at home. He brings his Siberian Husky, Tsumi, on campus about once a month.

“She’s the only dog I introduce to everyone,” Pulgarin said.

Although he has had her for a short time, Pulgarin already shares the same relationship with Tsumi as with his other three dogs. He has had three other huskies in the past and found Tsumi through a friend whose dog just had puppies.

Pulgarin got Tsumi when she was only one month and three days old, and he started flaunting her at the University immediately. Now at six months old, Tsumi has made an impression on students and gave them something new to look forward to every month.

Tsumi does not respond to anything but her name, which Pulgarin chose while going for a native-sounding name that refers to a symbol; in this case a tsunami.

“If I have a rough week, I go home to see my dogs, and I feel better,” Pulgarin said. “She helps my friends too because I’ve brought her to track meets, and if any of my teammates get disqualified or doesn’t do well in an event, she calms them down.”

Tsumi has emotions and acts like a human, Pulgarin said. She can speak on command, jumps on her owner’s chest, wants to sit on Pulgarin’s lap instead of the passenger’s seat while riding in the car- although she’s huge, she’s still a puppy-, shakes hands (paws) and gives lots of kisses. Pulgarin said these are the things he loves most about Tsumi; she is more like a friend than just a pet.

“She probably loves most that I feed her whatever she wants. If I’m eating a burger I’ll rip off a piece for her; she also loves apples and watermelon,” Pulgarin said.

Junior computer science major Sean Gribbin used to bring his corgi, Bruce, to La Verne on Fridays to give him a roasted chicken treat while he got chicken strips with his friends from Barbara’s Place. Gribbin dealt with loneliness and depression while living alone for one and a half years until he decided that getting a dog might be an effective coping mechanism.

“Knowing someone is always happy to see me when I get home and totally relies on me is helpful,” Gribbin said. “He makes me feel like a good parent.”

Gribbin said he was always cautious of getting a small dog since he has a black Labrador and a German shepherd at home and loves to wrestle with them. He was relieved to find out that wrestling is one of Bruce’s favorite pastimes as well.

Gribbin purchased Bruce from a corgi breeder in San Diego. He was skeptical about getting a smaller dog, but a corgi was a perfect fit because his apartment doesn’t allow dogs that weigh over 20-30 pounds.

“When all the dogs ran out, Bruce was the only one that sat in my lap and fell asleep,” Gribbin said. “He picked me.”

“The biggest thing that surprises me is how much we’re alike,” Gribbin said. “If I’m having a really good day my friends will say ‘you’re acting like Bruce today.”