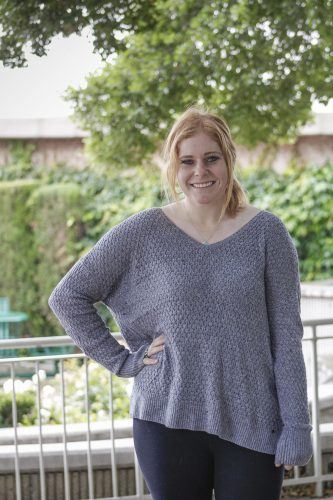 Senior business administration major Alexis Schiff played softball for all four years of her undergraduate career. She hit 16 home runs this season to earn the Southern California Intercollegiate Athletic Conference Athlete of the Year honor for 2016-17. / photo by Tyler Deacy

Alexis Schiff has a full list of accomplishments as a student and softball player at the University of La Verne and has now added the Southern California Intercollegiate Athletic Conference Athlete of the Year as an accolade during her senior year.

Schiff was also named to the National Fastpitch Coaches Association First Team All-West Region for the first time in her career after being named to the second team last season.

The numbers for Schiff were also outstanding this year. She hit 16 home runs, ranking second in the country, and had a .391 batting average with 43 RBI’s. Schiff’s performance helped lift her team to a SCIAC title and appearance in the NCAA Regionals in Texas.

How much does it mean to you as a player to win the SCIAC Athlete of the Year?

With all the success you had this year, who do you attribute it to?

Was there any time this year that you thought to yourself that you could win this award?
It’s always in the back of your mind, senior year especially. You want to come out the best that you can be and it happened to work out. Getting the award was just great.

How exciting was that final game in the SCIAC tournament with the walk-off and booking a trip to Texas?

It was amazing. Last year we came up short, we were in the same situation. We won our conference and we couldn’t get through that tournament, and so this year being able to come back and do what we couldn’t do last year was a great feeling. We always had that feeling in the pit of our stomach, how (bad) it felt and we didn’t want to be in that same position.

What was that team experience like to travel to Texas for the NCAA Regionals?

No one on this team has ever done the regionals. No one in this program has been there in seven years and it was just amazing to be able to bring our team to give everyone that experience and to show that La Verne is a name. We never really get to travel and being able to get on a plane and doing all the fun stuff and being under the NCAA was a lot of fun.

What will you miss most about La Verne and the team?

I’m for sure going to miss the family atmosphere. You have 20 built-in friends every year. We were so close and we work hard day in and day out. We start with 6 a.m. weights in the fall and you see everyone struggling, you see everyone grow, and having that camaraderie is something I’m really going to miss.

Now that you are graduating, what’s next?

As of right now I’m going to take the summer off and travel and enjoy my first summer without school or sports and just have fun. Then come fall, I want to pursue my masters in management.

Chris McMahan can be reached at chris.mcmahan@laverne.edu.

The Road to Recovery: Sports culture pressures male athletes to put it all on the line to win
Morgan showcases Best of La Verne