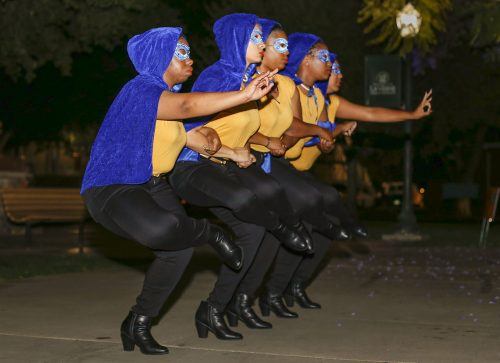 The members marched wearing royal blue masks and hoods as part of the reveal tradition. They were chanting, “It takes a real woman to be a real Sigma Gamma Rho.”

The new members lined up and began a dance and stepping performance. While performing, they chanted some history and facts about the sorority.

The reveal began by the removal of the mask and hood from each member and the presentation of the member with her first set of letters for Sigma Gamma Rho.

Following the reveal, there were more dance and stepping performances for the audience to enjoy.

“I felt that this school needed a more cultural sorority,” Collins said. “I think it would be beneficial for La Verne students to be exposed to a different type of organization that they are not familiar with.”

She added that her organization brings something new and exciting to campus.

“Since the sorority is historically African American I think it gives more women an opportunity to look at all the sororities and see which one best fits them and this just adds onto the great sororities that we already have on campus,” Collins said.

“It’s enhancing the African American community, making us a little more visual on campus, which is exactly what we need. Diversity is part of our core values so I think it gears toward that.”

Green said that the mission for the sorority resonated with her when she was first introduced to Sigma Gamma Rho.

“By helping being on campus, it helps us educate those on campus about what we do and help influence those by getting involved in a sorority,” Green said.

“I can see this is going to bring more diversity to on campus,” Mason said.

“We have sororities for people to look and really choose what sorority they want to be a part of based on their culture back home so they have more options.”

Green said that women on campus to feel welcome to join Sigma Gamma Rho if interested.

“I know ours is primarily African American, which you do not have to be African American in order to be a part of our sorority,” Green said. “I want our members to show a good example of what sororities are with Sigma Gamma Rho in particular. I just want us to make an impact of the University of La Verne as a whole.”