By Janelle Kluz, Mia López on May 5, 2017 in Feature Slider, Softball, Sports 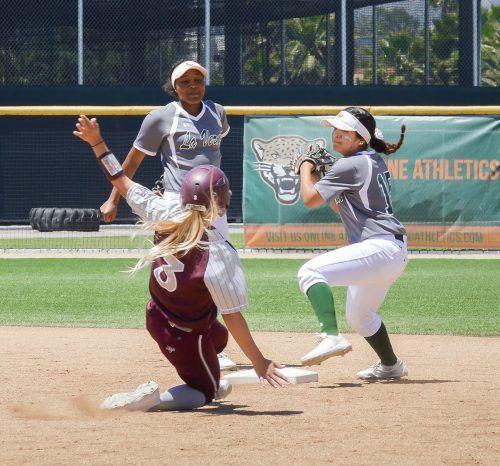 After tagging out Redlands senior third baseman Summer Smith, La Verne sophomore second baseman Michelle Deguzman throws the ball to first base for the double play in the top of the fifth inning Saturday. The final score was 8-0 at the end of six innings. / photo by Janelle Kluz

The Leopards have claimed the Southern California Intercollegiate Athletic Conference title for the second year in a row, after facing Redlands Saturday at Campus West. They swept the Bulldogs in their ninth conference championship appearance.

The first game of the doubleheader was a breeze for the team, with an 8-0 mercy rule win that guaranteed a share of the title.

Senior pitcher Hayley Jaquess was dominate for the Leopards, pitching a near perfect shutout and allowing only two base runners.

“We really came out to play today,” Jaquess said. “It felt great especially because it was my senior day.”

The Leopards got off to a slow start, scoring only one run in the first four innings. But they set the table for sophomore outfielder Carly Condon in the bottom of the sixth inning by loading the bases. Condon brought in three runs with a double. Sophomore outfielder Sienna Kendrick then sealed the Leopard win with a walk off grand slam homerun.

“It felt amazing that I was able to help my team get to this point again,” Kendrick said. “I’m happy knowing that I did everything I could to help my girls out.”

The Leopards got off to a good start in the nightcap when they scored four runs in the fourth inning. The Bulldogs answered back in the seventh by evening the score with a grand slam, forcing extra innings.

“I was waiting for the right pitch to come,” said DeAngelo. “When I saw it I just knew.”

The Leopards have finished 20-8 in conference, and 27-11 overall. They will host the SCIAC postseason tournament Friday through Sunday at Campus West as the top seed.

The tournament will consist of four teams, and will be double elimination.