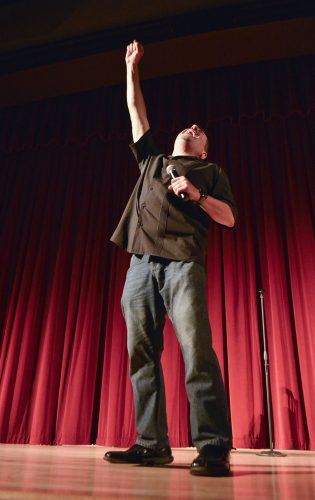 Ernesto T. Gritzewsky, who uses the stage name Ernie G., ends his motivational stand-up comedy show by reciting the poem “Our Deepest Fear” by Marianne Williamson Sept. 7 in Morgan Auditorium. Gritzewsky also talked about the trials and tribulations of growing up, as well as his Hispanic family life. The performance was hosted by the Office of Housing and Residential Life in honor of Latinx Heritage Month. See story on page 10./ photo by Janelle Kluz

In honor of Latinx Heritage Month, the Residence Hall Association invited empowerment comedian Ernesto T. Gritzewsky, aka Ernie G., to speak to students on the evening of Sept. 7 in Morgan Auditorium.

Ernie G. started by picking out audience members and talking about their individual heritage and culture.

“Don’t forget who you are and where you’re from,” Gritzewsky said.

He joked about his own Latino culture and the stereotypes that came with it, including his experiences growing up as Latino in East Los Angeles.

Ernie G lived in an area that he called the barrio, or the ghetto.

“Love and embrace every piece of yourself, even the little bit of ghetto in you.”

He explained how society portrays the word ghetto in a negative light, while he believed that being ghetto meant that you are a survivor.

He talked about the struggle Hispanic families went through to get their children to college, and how their children are products of their survival despite their background.

“Your parents are the reason you get to be who you are today,” Gritzewsky said. “You’re here in school living out your family’s dream.”

The joke that seemed to resonate the most with the audience was about Mexican moms scaring you with just a look.

He said that if you are Latino, you know that look meant you were going to be punished at home.

Gritzewsky became the first in his family to go to college when he attended Loyola Marymount University.

After the untimely death of his best friend and Loyola Marymount University basketball star Hank Gathers, Gritzewsky fell into depression, resulting in his expulsion from the university.

His aunt also passed away shortly after, adding onto his grief.

After being inspired by a motivational speech he saw on TV, Gritzewsky turned his life around.

He made a commitment to complete his studies in honor of his aunt and his friend.

He persisted in getting readmitted to LMU and graduated with a bachelor’s degree in psychology and a minor in Chicano studies.

“I relate to him hitting rock bottom and committing to something,” Damairis Lao, junior art and art history double major said.

“I attended his leadership class last semester, which motivated me to commit and become an interfaith leader here at ULV.”

Gritzewsky started his comedy career 20 years ago, after deciding to quit graduate school to become a full-time comedian.

He wanted to inspire others with his story by combining comedy with motivational speaking.

“Surprisingly, I related to a lot of the jokes he made, even though I am not Latina,” junior biology major Charonne Razafindralay said.

“I am an international student from Madagascar, and I was inspired by what he said about recognizing the importance of the hard work that my mother and father put into who I am today.”

This has been the fifth time Ernie G. was invited to do empowerment comedy at La Verne.

“He’s inspiring and he talks from a cultural perspective that most students relate to,” said Eugene Shang, director of residence life and student conduct.

“We want to bring people like that to inspire our students.”