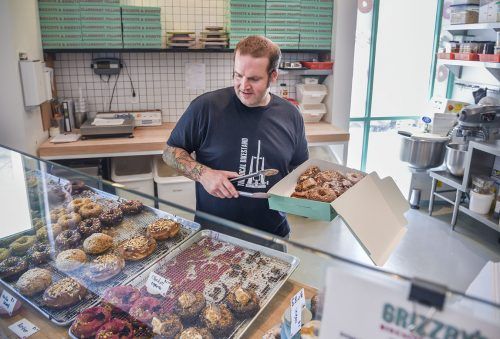 Grizzby’s Biscuits and Donuts is the first donut shop in the Claremont Village thanks to Travis Flood, owner of Pappas Artisanal in La Verne. Flood wanted to create an alternative to the typical donut and surprise his customers with unique flavors. Flood started in the cooking industry 25 years ago when his bike was stolen and his father wouldn’t buy another, so he had to get his first job in a kitchen. / photo by Cortney Mace

Not every restaurant in Claremont perfects their dessert’s appearance with a blowtorch. But Grizzby’s Biscuits and Donuts does.

Located in downtown Claremont, the breakfast shop has been serving up freshly made, custom flavored donuts every morning since April.

Guests can now enjoy trifles, a layered dessert usually including fruit, cake, creams and other sweet toppings from 7 p.m. to 11 p.m.

“They have beautiful layers, and great ingredients,” Grizzby’s baker Karen Arellano said. “Everything here is made with the best ingredients possible, which is really cool because you don’t always get to enjoy that.”

On the wooden counter at Grizzby’s sits bowls of cakes, fruits, creams and various toppings. They are layered methodically with great care to ensure a picture-perfect appearance.

“Everything is fresh, even the marshmallows, and everything is made in-house,” said Adriana Del Toro, a worker for the Grizzby’s dessert bar.

The idea for the new dessert bar came when Flood and Fong wanted to expand their hours, but provide different dessert options than other local places like Bert and Rockies and Some Crust Bakery.

While many of the flavors are classic combinations such as chocolate with peanut butter and red velvet with cream cheese, Grizzby’s also adds its own twist.

“A lot of our stuff is unique but familiar,” Flood said. “You know what it is, but it is prepared in a way you aren’t used to, haven’t seen, or in a manner that is impressive.”

San Dimas resident Vincent Medina and his friends Alex Rodriguez and Adrian Pichay came to Grizzby’s Sept. 14 looking for the donuts they love, unaware Grizzby’s did not have donuts on their late night menu at the time.

Luckily for those who crave their fresh and hot donuts as a dessert instead of breakfast, Grizzby’s will now have some of their popular donut flavors on their dessert bar menu.

“They are very unique donuts that you can’t find other places,” Pichay said.

Instead of leaving in disappointment, the group decided to stay and try the new dessert bar since they already had a sweet tooth. They ordered the Toasted Elmo.

With red velvet cakes and cream cheese frosting, the trifle has a marshmallow on top that gets torched to a crisp with a blow torch. It even resembled the character Elmo from Sesame Street in color.

“It isn’t a common dessert, I’ve never had it anywhere,” Medina said. “Our taste buds went on a very different, sugary roller coaster, they were all over the board.”

When guests arrive they get to watch as the trifle designers layer their custom made desserts.

Arellano said they usually watch with curiosity at how many toppings they add.

“It’s fun to see the smile on their face when they’re digging in,” Arellano said.

“It is that comfort that is like ‘yum’ and that finished product is such a pleasure to see people enjoy.”

After successfully running Pappas, Fong and Flood expanded their business ventures to Claremont with Grizzby’s Biscuits and Donuts on April 1 when they found the perfect-sized location.

Although they were not initially sure what they wanted to do with the space, after researching they discovered there were not donut shops or quick breakfast stops in the Claremont Village.

“We looked to provide something unique to the city, something we knew would be a hit and something that would be different,” Flood said.