By Mulan Novilla, Spencer Croce on September 22, 2017 in LV Life 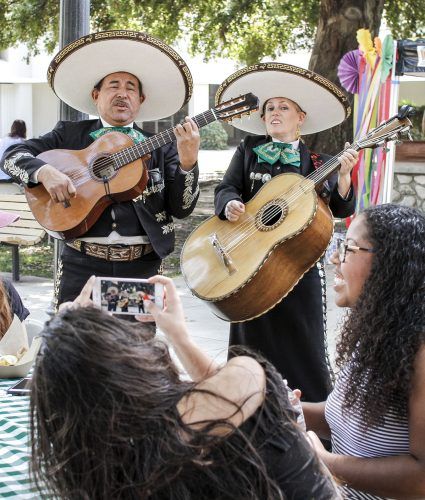 Music sounded throughout Sneaky Park as mariachi band members jumped around a table of people who were clapping and singing along.

A steady stream of students lined up along C Street for the food truck, observing the interaction at the tables while waiting to order their tacos.

Campus Activities Board members danced with the band as they gave away key chains specially designed for the event, held in celebration of Hispanic Heritage Month.

The event was created to remind Latino students to be proud of where they came from, as well as to educate those who are unfamiliar with their culture.

“I think a big portion of students are Latino and I wanted to have an event that celebrated all of the Hispanic countries, making sure that not a single one is forgotten,” Patterson said.

Although she is half Salvadorian and half African-American, Patterson was more intact with her Latina roots, growing up speaking Spanish and having a family-oriented upbringing.

Her event reflected her Latina background, and an atmosphere similar to the family parties she grew up attending.

“Tacos and a mariachi band are what people often think of when you celebrate Hispanic culture,” Mayan Gutierrez, sophomore speech communications major, said.

Mariachi is a type of Mexican dance music, usually played by a band of musicians wearing traditional costumes.

“I like interacting with the people we perform for because it’s more fun,” guitarron player Sally Hawkridge said.

Hawkridge has been performing with Aurelio Reyes (on guitar) and Crispin Arellano (on vihuela) for two years.

This is the first time they performed at University of La Verne.

“It gives me a sense of pride that the University holds events like these for students to celebrate and embrace their culture,” junior kinesiology major Ricardo Escobedo said.

“Events like these show diversity and inclusiveness, and it makes the students feel welcome,” he said.

Escobedo is the CAB Special Events Chair and helped monitor the line of students that came to the food trucks.

He wanted to support Patterson’s goal in staying authentic to Hispanic culture.

“I grew up embracing my culture and putting it out there,” Raquel Guillermety, freshman kinesiology major, said.

She attended the event to celebrate her Puerto Rican heritage and enjoy the food and music that was offered.

Freshman English major Abigail Humphrey grew up having difficulty fitting into a single culture due to being multiracial.

She is Mexican, Native American, African American and Caucasian; it was not until recently that she accepted her diversity.

“I like how inclusive this event was,” she said. “The key chains showed all the Hispanic countries; it’s important to be exposed to different cultures.”