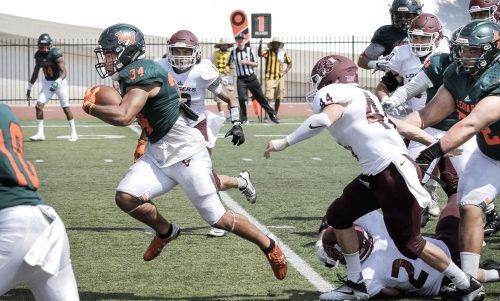 La Verne senior running back Robert Fernandez advances the ball against Puget Sound at the end of the second quarter Saturday at Ortmayer Stadium. The temperature was already in triple digits by 1 p.m. when the game began. The Leopards took and held an early lead despite a late game rally by the Loggers. In the end, the Leopards felled the Loggers with a final score of 33-25. / photo by Spencer Croce

Football returned to action with a 33-25 win against Puget Sound Saturday, as the University of La Verne hosted the Loggers at Ortmayer Stadium for their first non-conference game of the season.

“I think we came out really hot, if we can keep that throughout the game we’d be a lot better off in the future,” Evans said.

“We’ve been working on stuff like that all off-season and it’s finally starting to click in the game. I’m confident in us, I think when we start executing our stuff not many teams can stop us.”

After some back and forth play, Evans got on the scoreboard himself and made it a 13-0 game as his two-yard run forced its way into the end zone with five minutes remaining in the first quarter.

The Leopards continued gaining yards on every play utilizing senior running back Robert Fernandez’s strength carrying the ball, as he led La Verne on the ground rushing for 104 yards.

Yet, it was sophomore quarterback Sam Taylor who finished a 90-yard drive with a one yard touchdown to extend La Verne’s lead to 19-0 after a series of 15 plays.

“We have a high tempo in practice so we’re in shape after off-season training,” Medina said. “And I knew Fernandez was on deck if I ever got tired, so to go all out every play was the plan.”

Puget Sound got back into the game with three minutes left in the second quarter, as senior quarterback Tanner Diebold connected with sophomore wide receiver Alvin Johnson before senior kicker Drew Kristensen added the extra point, making it 20-7.

The Loggers’ defense then stopped the Leopards on the return before going for the field goal at the 29-yard line.

With the score 20-10 for La Verne at the half, Puget Sound reminded the Leopards there was still two quarters remaining.

The Loggers came out strong in the second half, with sophomore running back Vance Wood scoring a touchdown off a two-yard run.

Leopard junior kicker Eric Rembecky scored a 24-yard field goal to make it a 23-17 game before Fernandez extended on that lead after a seven-yard run.

La Verne then lead 29-17 before Rembecky added the extra point with only a couple of minutes remaining in the third.

With the fourth quarter underway, La Verne continued to keep the pressure on Puget Sound’s defense as Rembecky scored a field goal from 38 yards out, making it 33-17.

After a six-play drive, Loggers junior running back Paul Thomas found himself on the receiving end of a 10 yard pass from Diebold.

A two-point conversion pass to sophomore wide receiver Aiden Santino then made it a 33-25 game with six minutes remaining.

The Loggers continued to pressure the Leopards’ defense as they approached the 23-yard line before senior linebacker Connor Truhitte got the sack on first down, pushing Puget Sound back to a second and fifteen.

With 10 seconds left on the clock, sophomore Leopard corner Torii Hilbert slapped away the Loggers’ last chance of the game.

“If you ask me, I’m feeling the way I’m supposed to feel,” Hilbert said. “Banged up, sore, that comes with it. There’s no better feeling than winning, nobody really wants to be defeated. Yes, I feel banged up, but it’s okay because we got the W.”

Although managing to get within eight points, the Loggers were unable to turn the game around as La Verne came out with a win.

“Both teams are coming in trying to figure each other out, we gave them different looks and they gave us different looks so it’s kind of like a chess match when that happens. I thought it was a good test for us, we were excited to come out with the victory and I thought our offense and defense played pretty well.”

The Leopards have a bye week and will return to action Sept. 16 as they travel to Washington to face Whitworth.

Next, they will kick off conference play Sept. 30 at home against Cal Lutheran.