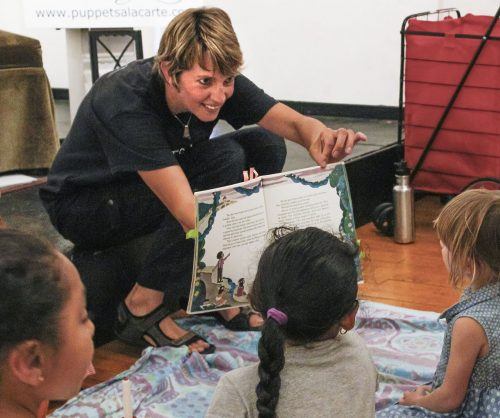 Children’s puppeteer Nicole Cloeren reads “Song of the Swallows” by Leo Politi Saturday at the dA Center for the Arts in Pomona, during the “Imagine II: The Art of Children’s Book Illustrations” exhibit opening reception. Cloeren used books, art crafts and a German puppet named “Else” to create an interactive storytelling experience with kids. / photo by Aryn Plax

A hot and thick fall evening did not stop crowds from enjoying a gallery full of youth inspired paintings, books and sculptures.

The exhibit celebrated 19 diverse illustrators who contributed artwork inspired by children and their imaginations.

“My daughter had so much fun when we came last month that we had to come again,” Los Angeles resident Mariel Ruelas said.

She and her daughter, Violet Ruelas, 3, strolled through the gallery glancing at all the different art pieces displayed on the walls and tables.

“I used to live in Pomona and came here all the time,” she said. “It’s a great space for the local community to enjoy.”

At the center of the gallery sat a podium with three pairs of white gloves and three books: “Bunker Hill Los Angeles,” “Three Stalks of Corn” and “Pedro: The Angel of Olvera Street.”

This display served as a tribute to the late children’s book author and illustrator, Leo Politi.

Politi’s family donated the books and some artwork to be put on display for all to enjoy.

Inside “Pedro: The Angel of Olvera Street” was a note from his son, Paul Leo Politi.

The note read: “Consuelo, to the sweetest teacher & ‘angel’ of Olvera Street. God bless you for the work you did with our children. From your fellow Angelinos & Leo Politi’s fam.”

Adjacent to the main gallery was a larger room equipped with a stage, rows of chairs and more walls full of artwork.

A particular piece that caught people’s attention bore a purple ribbon on it that read “People’s Choice.”

“It was an honor receiving this award,” Austrian artist and award recipient Susi Schaefer said. “The children were the ones who voted for me, and it feels like a confirmation of what I love to do.”

Schaefer’s piece was the cover for “Zoo Zen,” a book about a little girl who wants to learn yoga from the animals at the zoo.

Another unique piece came from former Utah resident Krissta Passanante. Her piece depicted a snail with an alarm clock embedded in its shell.

“It’s definitely a play on puns,” Passanante said. She chuckled at herself. “I just imagined if the alarm started to go off, the snail still wouldn’t go any faster than it already does.”

Passanante had two other pieces on display with very distinctive styles. She said she likes to paint a little of every style to be a well-rounded artist.

The artwork and a play put on by students from Pomona Unified School District were not the only entertainment offered for the night.

A puppet show by Puppets A La Carte, which is owned and run by Nicole Cloeren, was put on for parents and children of all ages.

“This is my first time performing at the dA Center,” said Cloeren. “I’m glad I gave the children here a chance to explore and see stories from a different point of view.”

Cloeren said she is booked for more events at the dA Center in the coming months.

The exhibit is open to the public every Wednesday through Sunday until Sept. 30.

For more information on “Imagine II” and the gallery’s other exhibits, visit dacenter.org.