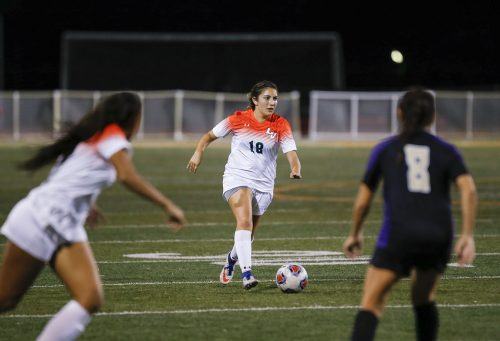 La Verne junior defender Hannah Leone dribbled the ball up the field as the end of the first half approaches against Whittier Saturday at Ortmayer Stadium. After a scoreless first half, the Leopards managed to beat the Poets, 2-1, after a last minute goal from sophomore Alina Cobian. / photo by Breanna Ulsh

“My coach always prints out stuff of where they put us in preseason. They picked us to finish last. It’s just a humble reminder that we want to prove everyone wrong,” junior midfielder Anna Ottley said.

La Verne dominated possession early in the first half and looked like a goal was coming, but the Poets led by the stellar play of junior goalkeeper Stella Thermos, managed to keep the Leopards scoreless in the first half.

Senior forward Jessica Hernandez, who leads the team in scoring, was largely frustrated in the first half as Whittier’s defense tried to limit her influence on the game.

La Verne’s defense was hardly tested in the first half, except for the occasional solo play of senior midfielder Lauren Kai, who gave the Leopards defense all they could handle.

At the beginning of the second half, Hernandez made a dangerous run into the top of the box and was tripped by a Poet defender creating the opportunity to score from a penalty kick.

“At halftime we said we are going to get a goal within the first five minutes and make runs that really helped get a foul in the box and Anna put it away,” Hernandez said.

Ottley made no mistake and placed her shot low and to the goalkeeper’s right side to put the Leopards up 1-0.

La Verne had a few opportunities to add to the score, but couldn’t convert.

With the introduction of junior forward Miranda Yzabal, the Poets began to dictate possession and play with her combining well with midfielder Kai.

The Poets earned a penalty kick in the 78th minute of play and Kai slotted it home to tie the game.

The momentum seemed to be on Whittier’s side and they appeared closer to the game winner than La Verne, until forward Andre Story received the ball in the midfield and went on a 40-yard run, to earn her team a corner kick with only five minutes to go.

“Set pieces, we get them, but they aren’t necessarily our strength. We’re more of a team that is trying to keep the ball on the ground doing some crossing and finishing,” head coach Lauryn Pehanich said.

The ninth corner turned out to be the charm as sophomore defender Alina Cobian was left completely unmarked inside the 18-yard box and tapped it in to give La Verne the 2-1 lead.

“There were five minutes left, so I just went up for the corner kick and stayed alive in the back post, when the ball came to me I gave it all I could and finished it,” Cobian said.

“A lot of my cousins and even my grandma from Teco (Tecolotlan, Jalisco, Mexico) came to the game tonight, so it was great to score in front of them,” she added.

With five minutes remaining there was still time for Whittier to come back and tie the game.

Hernandez, along with sophomore midfielder Catherina Posada, battled to keep the ball in the Poets’ defensive half and earned various throw-ins to manage time and see out the win.

“This is our home field, we know that Whittier is beatable and we know that we are a better team overall,” Hernandez said. “This year we are a team that bounces back, we’re the underdogs and we’re ready to show it.”

Hernandez now tops the SCIAC scoring charts with six goals, while Cobian was named the SCIAC Athlete of the Week.

“We were going to walk away with a win on our home field, no doubt. One hundred percent,” Hernandez said.

On Monday, La Verne beat the Caltech Beavers on the road with a colossal 8-1 win. On Wednesday the Leopards suffered a 1-0 defeat to Cal Lutheran to break their undefeated streak.

The Leopards’ record is now 3-2-1 in conference play.

La Verne will next travel to face Redlands at 11 a.m. Saturday at Farquhar Field.