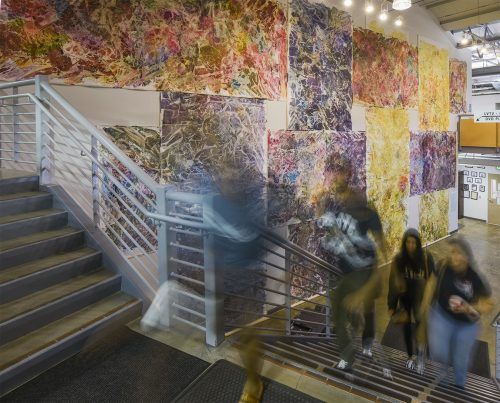 Bubble wrap, ribbons, leaves, and straw form the colorful abstract imagery on Rotem Reshef’s “Time Traveler,” installed Sept. 5 by Dion Johnson, director of art galleries, on the Tall Wall Space in the Arts and Communications Building. She earned a bachelor of fine arts from Hamidrasha School of Art in Israel and developed a painting method called “control and release,” which consists of spreading diluted paint on a canvas and covering it with a plastic sheet to dry. The opening reception will be held Oct. 12 and an artist talk will follow Oct. 14. / photo by Nadira Fatah

As soon as you walk into the Arts and Communications Building, a blend of icy blues, inviting yellows, calming purples and warm reds emanates from the left and draws attention to the 33-foot-by-46-foot wall.

“Time Traveler” by New York and Tel Aviv-based abstract artist Rotem Reshef is an original project created especially for the Tall Wall Space in the ACB.

Reshef visited La Verne in 2016 to attend an exhibit in the Harris Gallery. Tel Aviv and Los Angeles based curator Sagi Refael then proposed Reshef as an artist to create a major piece for the solo exhibit on the Tall Wall.

“It’s like a mix of Jackson Pollock and Picasso,” senior legal studies major and art history minor Stephanie Avalos said. “It’s so geometric; it seems like the seasons are interlocking and coming together.”

Reshef used impressions of materials like leaves, thread and plastic to create texture of the pieces on each 10-foot roll of canvas, making it reminiscent of the changes each season brings. Each piece was created with different materials to give the true effect of that time.

Reshef said to characterize each season, she used bubble wrap to display winter, ribbons for spring, leaves to represent fall and straw for summer. She rolled up a section of the scroll every time it dried so she could paint the next part with new inspiration.

“The title ‘Time Traveler’ echoes the seasons and passages of time,” Reshef said. “Although the repetition of the four seasons occurs every year, it never repeats in the same way. Every year is one of a kind. It disappears, only to reemerge again differently.”

The huge scale scrolls show that one color or shade is not enough to depict a season and all that it brings.

“The four seasons has been a central theme in the arts for hundreds if not thousands of years,” Refael said in a curator’s statement posted alongside the installation.

Each scroll in “Time Traveler” presents a monochromic passage of seasonal atmospheres, he added. The canvases are interwoven, creating layers that show the differences among the seasons, yet how effortlessly they flow together.

Dion Johnson, director of university art galleries, said that Reshef as well as many other artists in history have used landscape and time to incorporate the four seasons into their work.

“Abstract pieces become relevant to our atmosphere and environment,” Johnson said. “We think of colors as temperature and as seasons, this is a direct correlation to that.”

In art many expect to see perfection, but get confused when the image is not clearly depicted.

Johnson said that many viewers compare the art displayed on the Tall Wall to previous exhibits, but he likes to surprise people and deviate from what others think the Wall is supposed to be.

“Time Traveler” will be on display until Dec. 15.