By Audrey Gaudette, Brooke Grasso on September 15, 2017 in News 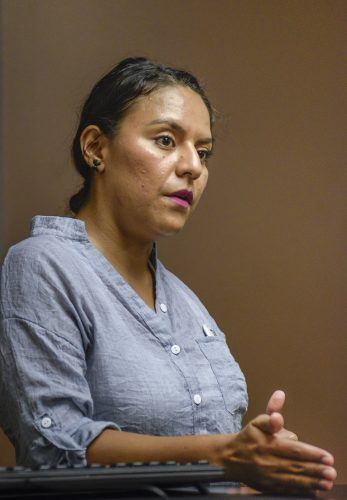 Jessica Huerta, community education coordinator for the Coalition for Humane Immigration Rights Los Angeles, spoke Monday in the President’s Dining Room. The talk was designed to address fears in the wake of President Donald Trump’s announcement Sept. 5 that he would end the Delayed Action for Childhood Arrivals program, or DACA. Trump has since indicated he may preserve DACA protections. Huerta said this is a time for communities to come together and accept one another. / photo by Audrey Gaudette

More than 50 students, faculty and staff filled the President’s Dining Room Monday night for an information session in response to President Donald Trump’s Sept. 5 announcement of plans to rescind the Deferred Action for Childhood Arrivals program, or DACA.

This week, Trump has started to negotiate with Democrats in Congress for alternative measures of DACA protection. However, immigrant communities across the nation fear for their futures due to the moment of uncertainty.

The event Monday was led by the Coalition for Humane Immigration Rights of Los Angeles, or CHIRLA.

Assistant Director of Diversity and Inclusivity Aracely Torres said there was an urgent need to bring awareness to immigrant rights and changes in law and policy under the Trump administration.

“We need to have an open mind (and) educate ourselves on these matters so we (are) aware that this impacts many different people,” she said.

The DACA program was put in place by the Obama administration in 2012 to allow undocumented immigrant students brought to the United States when they were children to continue their education and work here. DACA does not provide a direct path to citizenship.

To educate the La Verne community on the next steps for students and their family members affected by the possible end of DACA, Jessica Huerta from CHIRLA first showed the short film “America; I Too.”

The film highlighted the daily struggles and fear immigrants can experience.

“Maybe the person next to you has a family member or knows someone who is undocumented,” Huerta said. “It is critical that our community and allies are informed and make them feel like they belong.”

Torres pointed out that immigration is being more criminalized under the current administration.

While many Trump supporters question why immigrants do not “do the right thing,” many do not have the opportunity or resources for information, Huerta said.

Undocumented immigrants are also ineligible for government assistance for many necessities such as housing, healthcare and social services, even if they pay taxes, Huerta said.

“Our communities are living in fear, and we didn’t expect it to escalate this quickly,” she added.

Because of the implications this has for many immigrant families, Huerta said it is essential to have compassion and live by our core values. But she said the most important aspect is for everyone to be aware of their rights.

Junior business administration major and Dreamers Club president Cynthia Corona said this is a very personal issue because she has family and friends who are affected by the president’s decision on DACA.

When she heard DACA was being rescinded, she said it felt like a call to action.

“Because it doesn’t affect a lot of people directly, we fail to engage,” Corona said. “The first step is to raise awareness, and after that comes the action.”

If DACA is ended, current working permits distributed under DACA will be valid until they expire.