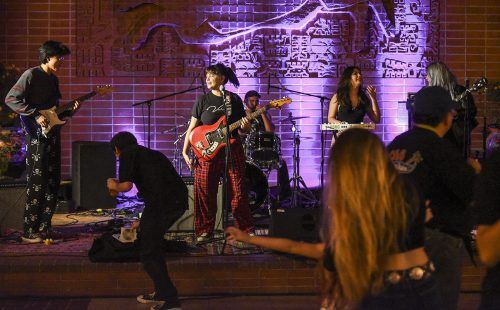 Siam Jem – a band consisting of Brayan Rosas, Michaela Rabina, Hector Avilez, Hannah Aries and Natalie Gonzalez – lighten the mood with their indie and pop music at the Millard Sheets Art Center patio at the Los Angeles County Fair Sunday. The concert was sponsored by Mi POCO L.A., an organization that brings together youth from Pomona and surrounding communities to celebrate the music, food and art of Los Angeles County. / photo by Nadira Fatah

Mi POCO L.A. – or Pomona Collective Los Angeles County – is holding a celebration of music, food and art through the Los Angeles Latinx lens every weekend outside of Millard Sheets Art Center at the Fairplex.

Directly translating from Spanish as my little Los Angeles, Mi POCO L.A. maintains a little taste of the City of Angels’ nightlife in Pomona even throughout the commotion of the Los Angeles County Fair.

The gathering brings the chill, outdoor summer concert vibe to the Inland Empire. A refreshing twist from the larger scale Summer Concert Series hosted by the Fair every year.

The event is the brainchild of new Los Angeles County Fair CEO and President Miguel Santana in an effort to attract millennials to the Fair.

The gallery features the exhibit “One Path Two Journeys” by Judithe Hernandez and Patssi Valdez, a display of “femicide,” which is “the toxicity that man puts on the female form,” exhibit receptionist Joey Salinas said.

Other than all being drawn with oil pastels, Salinas noticed connections between Hernandez’ pieces. All of the women portrayed in the portraits are wearing some type of mask whether skin sewn to a face, a piece of cloth covering a mouth or a colorful, tribal-looking mask that hides the true woman altogether.

Salinas said Hernandez wants her pieces to create open discussion; for people to talk about the art itself and not wonder what the things surrounding the piece mean such as the name.

Behind the gallery’s tinted exit doors is a cozy yet lively atmosphere complete with lights strung across trees and Latin American style woven cotton wrapped benches. The night air wafted with the smell of tacos and coffee from Mi Cafecito.

The opening band, Siam Jem, is a five-part group based in Pomona.

Michaela Rabina, rhythm guitarist and vocalist; Natalie Gonzalez, bassist and vocalist; and Hanna Aries, synth player, went to high school together at the School of Arts and Enterprise in Pomona.

The three went their separate ways after trying to live together for a year and a half after graduating high school.

“We have different tastes individually and collectively,” Aries said.

Each member called out an artist or band as they thought of what they like to listen to together – the Velvet Underground, the Strokes, the Pixies and Sade to name a few.

The members of Siam Jem described their sound as laid back, yet poppy and energetic. If they had to put a genre on it, indie suits best.

Rabina and Rosas looked like a duo on the outdoor stage donning red plaid and black skull and cross bone pajama pants. Their warm up strums already wooed the crowd along with the purple lit brick wall behind them.

Gonzalez’s mother, Herlinda Higueros’ face lit up when her daughter grabbed the microphone and began to sing.

Just seconds before, Higueros said she thought Gonzalez’s shy nature would prevent her from leading the vocals on the third song of the set.

“I’m very proud of her, it was hard for her,” Higueros said about her daughter’s first time singing for an audience.

The listeners caught on and joined in to support Gonzalez’s first vocal performance.

“This was her first time singing live ever,” Gonzalez’s brother Isaac said. “She’s really good. I was always the one who did music and then all this singing and bass playing came out of nowhere.”

Mi POCO L.A. will be open every weekend for the duration of the Fair, until Sept. 24.