By Catalina Diaz, Dorothy Gartsman on October 6, 2017 in News 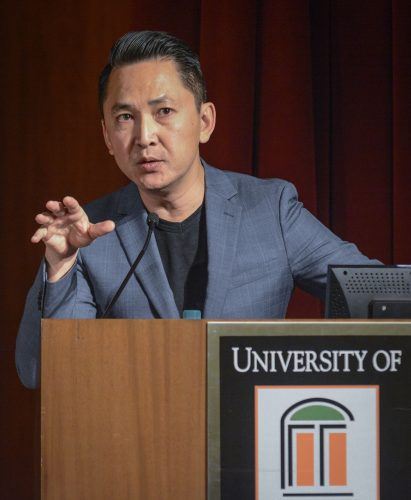 Pulitzer Prize-winning author Viet Thanh Nguyen discussed his book “The Refugees,” a collection of short stories about assimilation to American life, Wednesday in Morgan Auditorium. Nguyen also talked about his own experience as a refugee child following the Vietnam War. “The Refugees” was selected for the University’s 2017-18 “One Book, One University” program. / photo by Dorothy Gartsman

Nearly every seat in the Morgan Auditorium was occupied Wednesday night as Pulitzer Prize-winning author Viet Thanh Nguyen discussed his newest book, “The Refugees,” the University’s “One Book, One University” selection this year.

Nguyen, a Vietnamese American novelist, is the Aerol Arnold Chair of English and a professor at the University of Southern California.

In “The Refugees,” the short stories are based on occurrences and experiences told by people Nguyen had met and spoken to over the years.

Referencing the first chapter, titled “Black Eyed Women,” an audience member asked Nguyen how he had managed to display the emotions of the main character.

“I imagined their experiences with sympathy and empathy,” Nguyen said, adding that it took him 17 years and 50 drafts to do so.

He expanded on the ideas of sympathy and empathy, explaining that each are imperative to storytelling.

Feeling for others, pity and being able to identify with others – even those who are unlike ourselves – is critical for storytelling, but it’s not enough, Nguyen said. “A movement is necessary.”

The American Dream and it’s counterpart, the American Nightmare, were also ideas Nguyen considered in his presentation.

Nguyen also talked about the Vietnam War and how America had invaded the country.

Nguyen’s discussion addressed many points provided by various chapters in “The Refugees,” some of which led to heated discussion during the question and answer part at the end of the lecture.

“There were many underlying messages,” undeclared freshman Samantha Navarro said. She added that she had read the book, and initially disliked “Black Eyed Women,” but learned to love it as she interpreted and understood the messages within it.

“I was able to relate to the ‘Asian Invasion’ and clique part of the presentation,” Christine Insigne, freshman communications major, said.

Insigne added that she is the only Asian person in her dorm.

Nguyen told the audience of his family’s time in Ban Me Thuot, Vietnam, and their lives as refugees.

At one point the discussion became tense, when an audience member who who said he had fought in the Vietnam War questioned some of Nguyen’s points about the war, specifically that America had invaded Vietnam and Nguyen’s use of the expression “concentration camps” when talking about the Japanese internment camps of World War II.

Nguyen countered these concerns with historical facts about the two wars.

The objector eventually sat back into his seat, as Campus Safety officers hovered in the back of the auditorium to ensure a peaceful conclusion to evening.