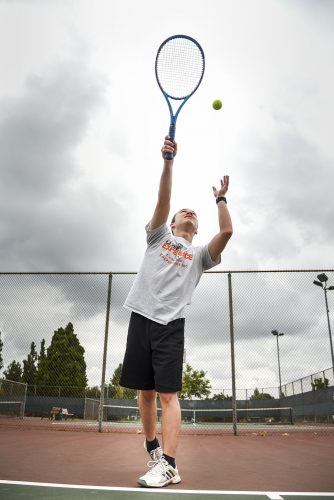 University of La Verne students recently started a tennis club on campus, which they hope will help fill the void left by the cancellation of the both women’s and men’s teams in 2016 and 2009 respectively.

“The … club is to get a group of people, male and female, who want to practice, play, and rally,” said Miguel Ignacio, junior business major and treasurer of the tennis club, said.

Ignacio said that when he found out there were no intercollegiate tennis teams, he wanted to create an opportunity for students play the sport.

“I was very disappointed when I found out there was no tennis team here,” said Michael Ojeda, a freshman biology major and tennis club member.

“When I saw the tennis club at the Club Fair I was so excited because I finally get to play again.”

Other students are also pleased about the new club, which is sponsored by the Associated Students of the University of La Verne.

The club currently has 27 members, both men and women, who practice and play at the courts in Las Flores Park in La Verne.

Practice is every Friday at 10:30 a.m., and is open to La Verne students and faculty.

“La Verne has a big tennis community,” said Ivan Fernandez, junior kinesiology major and tennis club president. “There are always tennis players out there, but they are not always very easy to find, and this club will make it easier for tennis players to meet each other (and) is a good way for students and faculty to build relationships,” Fernandez said.

The club has not scheduled official matches for the 2017-2018 school year, but the executive board wants to hold friendly competitive matches, events and practices within the club throughout the semester.

Fernandez said the club might contact tennis organizations at surrounding schools, so they can play them competitively in the future.

There are currently three events set up for this year, including a meet and greet round- robin tournament in October, a tennis camp in November, and a final tennis tournament in December.

“My goal is to set the ground work for a solid year and for success long after I am gone,” Fernandez said.

The executive board plans to establish the name for their organization, recruit new members and fundraise for new equipment and future traveling in the upcoming semester.

“This … will definitely make the campus better,” said Daniel Basurto, sophomore political science major and tennis club member. “I’m excited about meeting new people and getting back into tennis.”

Madison Rubino can be reached at madison.rubino@laverne.edu.