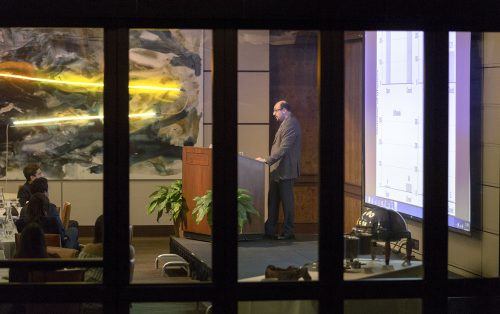 Evgeny Finkel talks about his book “Ordinary Jews: Choice and Survival During the Holocaust” Monday as part of the Marian Miner Cook Athenaeum program at Claremont McKenna College. Finkel is an assistant professor of political science and international affairs at George Washington University. Finkel’s research looked into the ghettos in Germany during World War II and why people did not flee at a higher rate. His research for the book involved interviewing numerous Holocaust survivors, including his grandfather. / photo by Taylor Griffith

Evgeny Finkel, an author and assistant professor of political science and international affairs at George Washington University, spoke about his latest book, “Ordinary Jews: Choice and Survival during the Holocaust.”

Finkel said he wrote the historical book out of frustration and based “Ordinary Jews” on Holocaust survivor stories, including his grandfather’s, and other experiences shared with him.

Finkel said the book was about “Germans killing Jews, and Jews trying to survive.”

He explained that his specific focus was to talk about the behaviors of and the decisions Jews had to make during the pre-war and World War II periods, and how the different ghettos they were placed in played pivotal roles.

Finkel showed data about the number of ghettos housing Jews, the length of their existence and how many escapees and survivors there were.

Finkel research shows there were approximately 677 ghettos in Poland, 328 in the former Soviet Union, 91 in Lithuania and 29 in Latvia based on 1939 borders.

Of the ghettos in Poland, 272 were considered open, or had no barriers keeping the people inside and 312 were closed, or had some type of wall or enclosure.

In the former Soviet Union, there were 94 open ghettos and 121 closed.

More than 50 percent of the ghettos had no obstacle from escaping, Finkel said, which furthered his question and purpose for the evening: what prevented them from leaving?

“No matter how hard Germans tried, they could not break their humanity,” Finkel said when explaining that with humanity comes choices.

Finkel focused his data on the ghettos Krakow and Białystok, both located in Poland, as well as Minsk which was located in Belarus.

Collaboration, coping and organized resistance were the three choices that those in the ghettos were faced with, according to Finkel’s presentation.

Of the three, the Białystok ghetto consisted of the most established of the Jewish communities, which Finkel said showed coping and cooperating as the apparent choices.

With coping, Finkel said, Jews in the ghettos became more complacent and comfortable with their situations, which was the opposite of the choices made by those in both Krakow and Minsk.

The ability to speak the language of those outside ghettos were imperative to those who wished to escape and live a free life, Finkel said.

“They were just trying to survive, but realized coping will not bring survival,” he added.

Those who decided to escape had better chances of survival because they had cultural knowledge of the areas surrounding the ghettos, whether it was by going to school with other children and learning their behaviors and languages, or by making friends on the outside in hopes that someday they could call on them for favors, Finkel said.

“To what degree did the locals play in helping those who escaped?” asked Sam Lushtak, a sophomore computer science major at Pomona College.

The problem was finding those people to help, Finkel explained. He added that the locals were also in danger when helping escapees, and this is why the survival skills the escapees had learned were their only real lifeline.

Gary Gilbert, professor of religious studies at CMC, asked Finkel if he felt that orthodox Jews had a more difficult time choosing to escape than secular Jews.

Finkel answered yes and explained that an orthodox Jew would have had a harder time agreeing to change and doing things like setting aside their religion at times, that secular Jews would to escape or better their chances to escape the ghettos.

Age was a random factor when discussing the difference between resistance and cooperation with Nazis; the youth were less likely to cooperate than elderly.

“Why is age a random factor and not a determining factor?” asked Isabelle Ruiz, a high school senior and prospective CMC student.

“What’s random is the timing in which they decided to act,” Finkel said. He added that they too had families to take care of and responsibilities as many others did.

Finkel said one main goal of his lecture was to show both the help those understand that just because someone is a survivor does not mean that they should be dehumanized.

“These are my people,” he concluded.