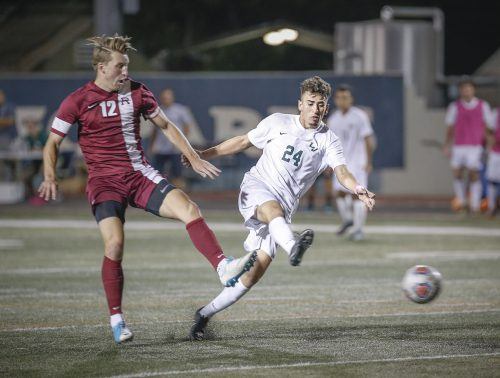 Leopard freshman forward Johnny DeRueda moves the ball downfield after Redlands scored twice in the second half and put an end to La Verne’s 2-0 lead Saturday at Ortmayer Stadium. The game remained tied at 2-2 after overtime. / photo by Breanna Ulsh

Despite managing a 2-0 lead and playing with a one-man advantage for 55 minutes, the men’s soccer team tied 2-2 in overtime against the undefeated Redlands, Saturday night at Ortmayer Stadium.

Facing the No. 1 team in the Southern California Intercollegiate Athletic Conference, the Leopards had one of their best performances of the season. La Verne came out with strong energy from kickoff and did not allow the adversary’s possession translate into control.

The Bulldogs’ initial strategy of circulating the ball in the Leopards’ third quarter, patiently attempting to infiltrate the compact defensive block, seemed to indicate that persistence would eventually pay off.

La Verne, however, started to gradually pressure higher up and managed to avoid the trap they set for themselves in previous games: a solid defensive system, but unable to establish itself in midfield. The reward did not take long to arrive, as freshman forward Johnny DeRueda netted his second clear chance at goal to make it 1-0 for the Leopards in the 12th minute.

With the assist by sophomore forward Jack Kolodge, who sprinted through the left wing to send his teammate a precise centralized cross, DeRueda added to his seven total goals, which ranks second in SCIAC.

“It was a cross from Jack across the field and I came in and headed it into the second pole,” DeRueda said. “It felt good. Whatever I can do to help out my teammates.”

That was the first time that the Leopards made it to the scoreboard before their opponent.

Redlands remained persistent in trying to find their goal, but La Verne stopped all attempts, with great defensive efforts and key saves by freshman goalkeeper Tristan Polakowski paying off.

Polakowski had nine saves – five in the first half – before being subbed off by junior Josh Ramirez in the 26th minute of the second half.

“It feels great, I don’t know how to describe it, but it’s a great feeling,” Polakowski said. “I thought we played pretty well. We came out, we attacked and we got two goals up. We were good defensively, they haven’t lost a game all season so to take points from them is remarkable.”

La Verne benefited from the efficiency absent in previous games, when they could create but not convert goal-scoring opportunities. At the end of the first 45 minutes the Leopards had two shots, one on goal, while Redlands had 13, five on goal, enough to give the home team a partial lead and clean sheet.

Early in the second half the Bulldogs had chances to equalize, but the next time the ball hit the back of the net was to extend the Leopards’ lead from the penalty spot, in the 55th minute. Attempting to stop La Verne’s DeRueda in a counterattack, Redlands’ junior defender Joey Kenney fouled the forward.

That earned him a straight red card and gave the Leopards a chance to make it 2-0, with senior midfielder Javier Jasso stepping up for the penalty kick.

“I would say we were definitely more hungry,” Jasso said. “We scored in the first half and in the second half we had a pep talk from our coach which pumped us up even more.”

Despite the one-man advantage, significant lead and the good momentum, La Verne put themselves in a tight spot by allowing Redlands to get comfortable. After getting a goal in the 67th minute with sophomore forward Antony Chonga, the Bulldogs netted one more just five minutes later with senior midfielder Casey ChubbFertal, to turn a 2-0 deficit into a 2-2.

“I would definitely say we just got too comfortable too quick,” senior defender Ferdinand Estrada said. “Against a team like Redlands it’s definitely something you don’t want to do because they can punish you really quickly.”

Different from most games this year, where La Verne first conceded a goal to then chase the result, this time the put themselves in a good position.

“That has been a big issue this year, so we’ve been adjusting it lately and I feel like we finally just came in ready and had a good warm up,” senior midfielder Auden Foxe said.

“I thought we played a great first half and then had a good 20 minutes in the second half, but kind of just slowed in the middle of it and it bit us in the butt,” Foxe said. “Set pieces again, which have been our weakness so far this year. We just got to tighten up a couple screws.”

With the game tied, Leopards and Bulldogs went back and forth, showing neither was ready to settle for a draw. Despite several chances on each side, the scoreboard remained unchanged at the end of the 90 minutes, taking the game to overtime.

After two disputed and physical halves in overtime, the tied prevailed to give La Verne its second draw and Redlands its first non-win in the league.

“Today we actually played like a team, we actually worked on what our coach taught us and we didn’t try to do everything ourselves,” Ramirez said. “We stuck to the game plan and we executed, the only problem on the downfall is we just let our guard down for two seconds per goal and they punished us.”

Ramirez made four saves in the game and is ranked third in save percentage in SCIAC, with .800, and fifth in saves with 36.

“We’ve recently developed the strength of starting off and coming out 100 percent,” Estrada said. “We used to start really slow and recently we’ve actually built that into one of our strengths, actually coming out hard, which is why we had a 2-0 lead in the beginning.”

The Leopards are 5-5-2 overall and 2-5-2 in SCIAC. They will host Caltech 5 p.m. Saturday at Ortmayer Stadium.

Giovanna Z. Rinaldo can be reached at giovanna.zelonirinaldo@laverne.edu and on Twitter @giozrinaldo.