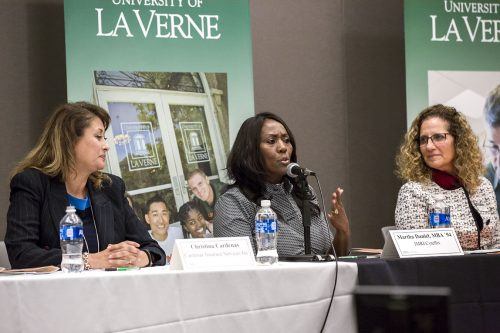 Christina Cardenas, Martha Daniel and ULV President Devorah Lieberman share stories of their success as businesswomen at the Women’s CEO Forum Tuesday in the Campus Center Ballroom. Cardenas is an insurance broker focusing on small business. Daniel, who graduated from La Verne in 1994, is a cyber security expert whose company holds several government contracts. The Forum, hosted by the College of Business and Public Management, promoted women in the world of business and included a Q&A session. / photo by Taylor Griffith

Six influential businesswomen shared the lessons they learned, hardships they overcame and successes they earned throughout their journey to becoming the leaders and CEOs they are today, Tuesday evening at the Women CEO Forum.

Roughly 100 University of La Verne community members filled the Campus Center Ballrooms for “Lessons Learned on the Road to Success” organized by the College of Business and Public Management.

Each of the panelists reflected on their experiences being a woman in a male dominated environment and how they acclimated.

Daniel found her niche in the technology industry more than 35 years ago.

After receiving her bachelor’s degree from Cal Poly Pomona in computer information systems, Daniel received her masters of business administration from University of La Verne in 1994.

Her vast experience includes serving as a cryptologist for the United States Navy, chief information officer at FDIC and senior systems engineer at IBM.

“I just have one word, baseball,” Sellers said about how she connects with men in the workplace. “The question really becomes how do you deal with, and do business with men?”

Although many believe the non-profit sector is dominated by women, fundraising for her programs requires going to corporations that can donate, which are usually run by men. While it is a challenge, Sellers said she enjoys working with men and has figured out how to talk about things they are both interested in, such as baseball.

“I don’t want to come across as a woman who’s trying to do something in a men’s environment, I want to be genuine about it,” Sellers said.

Sellers is not new to being surrounded by men in the workplace. She served as the president of South Pasadena Rotary Club, which she said is made up of 80 percent men. In 2015 she received the Rotarian of the Year award and has received numerous other titles, including the Top Nonprofit Executive by Los Angeles Business Journal in 2014.

Sellers’ journey today was very much encouraged by her family life. Raised by a single mother, she became independent very quickly.

“I was a product of school lunches, Boys and Girls Clubs, lots of non-profits organizations and vacation bible schools,” Sellers said.

She said that she never gave them much thought while she was growing up, but now realizes how much the community relies on the programs to provide services when there are gaps.

When Sellers was pregnant at 23, she went into preterm labor and had a baby boy named Reese, weighing just over two pounds. Because of his prematurity, after four months in the hospital, Reese developed a significant amount of disabilities.

She began doing advocacy work for kids with disabilities and worked with Huntington Hospital, meeting parents in situations similar to her own. She saw that many parents were sleeping in the waiting rooms, and in one case a family was driving down every day from Camarillo to be with their baby.

“That was my message that we needed to start a Ronald McDonald House in Pasadena,” Sellers said.

The process took more than six years, but Pasadena’s Ronald McDonald House opened on Reese’s 10th birthday in 2004. He died at age 13.

Cardenas’ career was also inspired by her family life. She watched her mother start her own business, and began helping at a very young age.

“I was in sixth grade and she thought I was really good at math, so she asked me to do the payroll,” Cardenas said.

As a seamstress and designer, her mother was designing patterns for ski jackets for Armor All, Toyota and the Los Angeles Raiders.

“The biggest thing I learned from watching my mom in that business is that she had so many aspirations,” Cardenas said. “The one thing is my mom worked really hard in her business, but didn’t get to work on her business.”

Cardenas said she believes her mom could have done more with the business, but she didn’t know what avenues to look for or what resources there were as a woman in the 1970s.

Now as insurance broker she sees a lot of those same stories, and is proud to be in a place where people can seek out advice, like she wishes her mom had access to.

“I am so inspired by every one of you,” senior business major Kathy Louis-Sanders said. “I feel like a piece of your life has been a piece of my life.”

Sanders said that she was asked to come to the forum by her marketing professor and although she thought it was just for extra credit, it turned out to be a blessing.

“I have someone who is going to hospice right now, and it was so hard to be here because I really wanted to go be with them, but I needed to follow through with my passion.”

When she graduates she’ll be 61 years old and has a passion for entrepreneurship. Sanders asked the panelists for inspiration and motivation.

Correction
An earlier version of “Panel praises women CEOs” (Oct. 6) stated that the Ronald McDonald House in Pasadena opened in 2013. It actually opened in 2004. The Campus Times regrets the error.