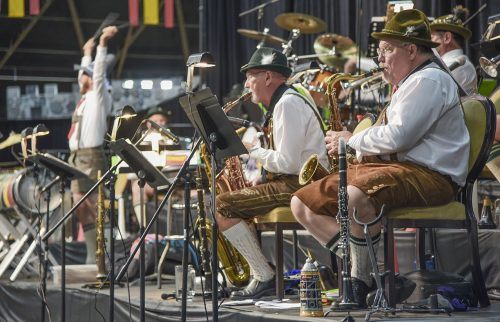 Ein Prosit and Steve Toren play the saxophone for the Vancouver Rheinlander Oompah Pah Band. Among other performances, the Vancouver-based band performed on Friday at the Fairplex Oktoberfest for the annual Bavarian festival. Their repertoire includes polka and oompah pah music but their most requested performances are drinking songs made popular during the celebrations of the Famous Munich Hofbrauhaus, a German festival situated in a beer hall from the 16th century. The songs performed are not only from the Bavarian tradition, but they also bring the community together to pay a tribute to the year’s harvest./ photo by Nadira Fatah

Southern California residents got a taste of Oktoberfest with its return to the Fairplex in Pomona Friday, fully equipped with Bavarian music, authentic German sausage and 32-ounce beer steins.

Oktoberfest originally celebrated a royal wedding in Munich, Germany in 1810. The celebration lasted for five days and has since then evolved into a beer festival.

Still celebrated in Munich, Germany, the festival has spread to many parts of the world, but celebrations hold the same core traditions.

“We’ve heard so much about this festival so we had to come and see what all the hype was about,” Rene and Arlene Alfaro of Los Angeles said.

“Everything here is so out of the ordinary, but we’re really having a great time checking everything out.”

The Alfaros were out celebrating Rene’s 38th birthday and said they will likely come back next year.

An 11-man band known as an Oom Pah Pah were dressed in lederhosen – which are traditional green overalls – and played traditional German music as festival goers entered through the main hall.

The band frequently stepped off stage and encouraged the crowd to sing along, shout cheers and participate in group dances.

“I definitely was not expecting to do the chicken dance here today,” Maria Zavala of Whittier said.

“The trumpet player from the band made it really easy for everyone to feel comfortable enough to join in on the dance.”

Shortly after the chicken dance, the band asked for 15 women to head to the stage for a friendly competition.

The stein holding competition challenged contestants to hold a full 32-ounce beer mug directly in front of them for as long as they could.

The last one standing with their mug in front of them was the winner.

“It was so much fun but I’m so sore now,” Cheryl Isell of Duarte said.

“I honestly didn’t have a game plan when I went on stage, but I knew I didn’t want to be the first one to lose.”

Isell was given a first-place prize pack with various Oktoberfest treats.

“I’ve never had a bratwurst on top of a burger, but it is amazing,” Irving Lopez of Los Angeles said. “The food and entertainment here are great, and I couldn’t ask for a better tasting Oktoberfest beer.”

Lopez said he will be returning with more friends in the coming weeks to share his exciting experience and enjoy some more seasonal Oktoberfest beer.

Oktoberfest will be at the Pomona Fairplex every Friday and Saturday throughout October.

For tickets and information, visit fairplex.com/events/oktoberfest.