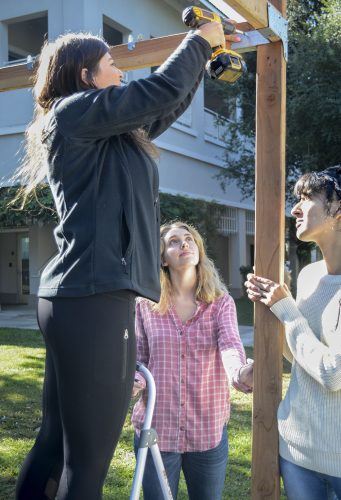 Senior business administration majors Melanie Browdy and Samantha Brenner, and Sophomore Educational Studies Major Sofia Borbon help with the construction of the Sukkah for the Sukkot celebration Wednesday in Sneaky Park. The celebration represents the 40-year temporary stay of the Jews in the desert following the Egyptian Exodus. / Dorothy Gartsman

Hillel, the Jewish cultural club, and the Center of Multicultural Services worked together to build a Sukkah Wednesday in Sneaky Park to celebrate the beginning of Sukkot.

Sukkot is a Jewish holiday that commemorates pilgrimage and lasts approximately one week. It was originally celebrated as a thanksgiving for the fruit harvest.

“Jewish or not, I want everyone to feel like they belong,” Melanie Browdy, senior business administration major and president of Hillel, said.

“This is a space where the community can come together to eat, celebrate and feel like they’re among friends.”

The Sukkah took approximately two-and-a-half hours to build from the ground up with the help of faculty and students.

Each person took a turn holding a beam, drilling corners together and helping erect the 8-foot hut.

“I hope that everyone who participates feels a sense of inclusivity on campus,” she said.

Once completed, the Sukkah was covered in a green tarp and had bamboo mats for a ceiling.

The inside of the Sukkah was decorated with tables full of food, vines with dangling fruit and pictures with Hebrew script.

Cantor Paul Buch from Temple Beth Israel in Pomona blessed the Sukkah and kicked off the celebration with singing and worship.

As the festivity continued, a new station was being put together just outside of the Sukkah.

The Office of Diversity and Inclusivity set up an “I Stand With Immigrants” station to participate in a national day of action for DACA students.

“The term ‘immigrant’ has become such a dirty word but it is the natural way of humans,” Daniel Loera, director of multicultural affairs, said.

“Sukkot is a celebration of people who are on the move and it is wonderful that we can all be here together making this powerful connection.”

Students were invited to express why they stood with immigrants with each other and on graffiti boards.

“Immigrants make up the world,” Aracely Torres, assistant director for the Office of Diversity and Inclusivity, said.

“The current national dialogue we need to show immigrants play a huge role in this country and we all stand together,” she said.

Torres said University Chaplain Zandra Wagoner thought it was a great idea for the two events to be celebrated together.

The Sukkah will be available to everyone in Sneaky Park until Monday.