By Celeste Drake, Mark Acosta on October 20, 2017 in Sports, Volleyball 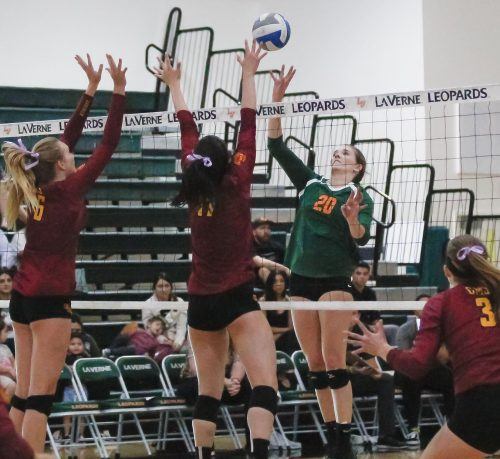 Junior middle-blocker Kelsie Sievers tips the ball during the fourth set of the game against the Claremont-Mudd-Scripps Tuesday at Frantz Athletic Court. The Leopards ultimately lost to the Athenas, 3-2, after five sets. La Verne will next face Chapman on the road. / photo by Celeste Drake

The game was dedicated to sophomore outside-hitter Mireya Rojo, who is fighting Hodgkin’s lymphoma.

Raffle tickets were sold as well as t-shirts and green ribbons, with all proceeds from the raffle going to help with her treatment.

“This is what La Verne does,” head coach Jenna Panatier said. “We are a family and we showed that here tonight.”

“It was great to see the support we had tonight,” senior outside hitter Marisa Rojo said. “Last time we lost in three sets to them so tonight we played one hell of a game.”

The Athenas came out in the second set and took it to the Leopards. Claremont-Mudd-Scripps recorded six straight points before La Verne got their first. Better hitting by the Athenas got them ahead early and kept them there the entire set.

The third set got off to a good start for the Leopards,as they were able to get ahead, 6-4. Claremont-Mudd-Scripps kept battling and eventually took the lead and forced a timeout by La Verne, who was down, 13-11.

The two teams kept trading points with one another. The Athenas grabbed a late lead at 22-20, but the Leopards refused to give them the set. Rallying to get the game to 24-24, they got the next two points and won the set 26-24.

“When you have a focus like we do with Rey (Mireya Rojo), I think it just brings out the best in people,” Panatier said. “It definitely has in my team.”

The fourth set was as competitive as the third. Both teams traded points and there were several lead changes in the set. La Verne trailed early, but was able to come back from that and take a 14-13 lead. From that point on, the Leopards trailed the Athenas and eventually lost the set 22-25 forcing the fifth and final set.

“It was really emotional,” said junior setter Natalie Barragan. “We were trying to channel those emotions to get us to play well. We came together as a team and the crowd really helped.”

In the deciding fifth set, both teams got points early and the game came to a 6-6 tie.

The next three points went to the Athenas and La Verne was able to hang around, but it was not enough as Claremont-Mudd-Scripps took the fifth set 15-10, and the game 3-2.

“Even though we lost, nobody ever put their head down,” freshman outside hitter Kiana Valdivieso said. “We fought the whole time for each other, especially Mireya.”

Despite the loss, the Leopards are in second place in the Southern California Intercollegiate Athletic Conference with a record of 9-3 and 16-6 overall.

La Verne’s next game is against 4 p.m. Saturday at Chapman. After that, they will host Pomona-Pitzer 7 p.m. Tuesday.