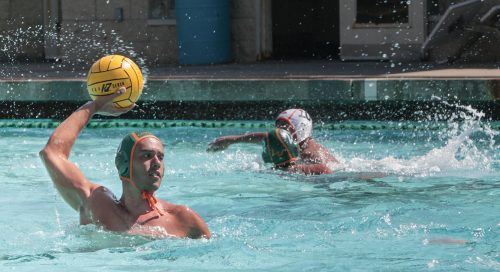 Junior center Mike Meza passes the ball to an open teammate during the men’s water polo game against Caltech Saturday at the La Verne Aquatic Center. The Leopards drowned the Beavers, 17-7 but lost against Claremont-Mudd-Scripps Wednesday night. / photo by Celeste Drake

The Leopards’ record improved to 3-5 overall and 1-3 in Southern California Intercollegiate Athletic Conference, while Caltech’s record fell to 4-5 overall and 1-2 in SCIAC.

La Verne found their groove early as they went on an eight-goal streak late in the first quarter and continued into the second.

Junior center Mike Meza opened the scoring for La Verne, but Caltech answered by swapping goals back and forth in the first quarter.

“I wish we didn’t let them score seven goals, especially three in the first quarter,” head coach Pat Beemer said. “All of them were our fault. We can always be better defensively.”

The scoring was spread evenly throughout the team as nine players of the 13-man roster scored against the Beavers’ defense.

“We mostly focused on defense and not turning the ball over,” graduate student center Tyler Bennett said.

“We knew that the goals would come naturally,” he said.

Bennett led the team offensively with four goals and senior driver Rey Julian Castillo was right behind him with three goals and three assists.

The Leopards played aggressive defense and Castillo had four steals, while junior attacker Jason Russum added three more of his own.

“I expected us to work as a team and on our defensive coordination as well as executing our plays and doing what we know how to do,” Castillo said.

Freshman goalie Brian Wilder held down the defensive side of the game for the Leopards with seven big saves.

“We didn’t really know what to expect from Caltech after they had a really historic game against Occidental on Wednesday, getting their first league win in 17 years,” Beemer said.

“We expected a highly motivated team who was going to try and get their second win in a row.”

La Verne was able to shut down Caltech’s motivation early into the game and the Beavers were unable to recover after the eight-goal run by the Leopards.

Although the Leopards started off conference slow with three back to back losses, they hope to use this big win to carry them for the rest of the season, Beemer said.

The Leopards took on the Claremont-Mudd-Scripps Stags at 7 p.m. Wednesday at the Axelrood Aquatics Center, but lost, 18-8.

The Leopards dropped their overall record to 3-6 and 1-4 in SCIAC play.

“This win is motivation for us to keep the momentum going throughout the rest of SCIAC play,” Castillo said.

La Verne next faced Iona Thursday morning and lost by a score of 10-9 against the Killians.

Next up La Verne will participate in the Troyer Tournament with the first game Friday morning against La Salle in Claremont at 8 a.m.

La Verne returns to SCIAC play Saturday against the Pomona-Pitzer Sagehens at 4 p.m at Haldeman Pool.

Madison Rubino can be reached at madison.rubino@laverne.edu.