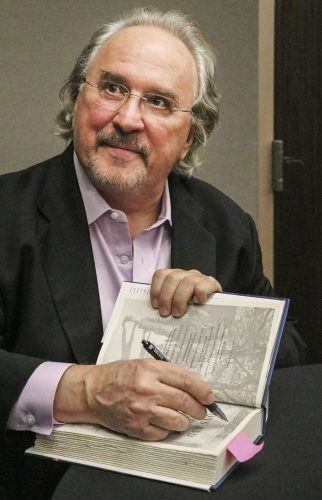 Author Bruce Henderson spoke about German-Jewish interrogators at the annual Kristallnacht Lecture, Sunday in the Campus Center Ballroom. After the lecture, co-sponsored by the University of La Verne and the Jewish Federation, Henderson signed books and followed up with attendees about his speech. / photo by Katie Pyne

Imagine that, after surviving three months in the Dachau concentration camp in Germany, you immigrated to the United States and later interrogated German prisoners of war for the U.S Army. One of your POWs was an officer for the Schutzstaffel, or SS, a paramilitary organization serving the Nazi regime. As a show of intimidation, and perhaps as personal vengeance, you told the SS officer that you “learned a thing or two about how to treat prisoners while in Dachau.”

That is the story of Martin Selling, one of the many German Jews documented in Bruce Henderson’s book “Sons and Soldiers: The Untold Story of the Jews Who Escaped the Nazis and Returned with the U.S. Army to Fight Hitler.”

Henderson presented on his book as part of the annual Kristallnacht lecture Sunday in Campus Center Ballroom A.

The book documents the history of Ritchie Boys, or German Jews who immigrated to the United States as children, only to return to Europe as adults and provide the U.S. army with vital intelligence through interrogation of German POWs.

The annual lecture, co-sponsored by the University of La Verne and the Jewish Federation, commemorated the 79th anniversary of Kristallnacht, a violent wave of attacks carried out against Germany’s Jewish population in Nov. 1938. University Chaplain Zandra Wagoner said that Kristallnacht, literally translated into “Night of Crystal,” is often called “Night of Broken Glass.”

“Kristallnacht is often understood as the beginning of the Jewish Holocaust,” Wagoner said.

Henderson said he first got the idea for his book about the Ritchie Boys while reading an obituary in the San Francisco Chronicle, which said that a German Jewish man had been sent by his family to the United States, trained among the other Ritchie Boys in the U.S. Army, and returned to Europe to interrogate German POWs.

“I thought ‘Wow’ – this is how writers think sometimes – ‘what a dramatic arc, starting there, getting over, coming out, and going back,’” Henderson said.

The obituary served as his starting point. Henderson said that he sought the help of a researcher from the National Archives of College Park Maryland in finding the living Ritchie Boys. He conducted interviews with six former Ritchie Boys and worked with transcripts, which he will deposit to the Holocaust Museum of Washington. He integrated his research from interviews and archival information about their units into a narrative nonfiction work.

The Ritchie Boys lost contact with their families after immigrating to the U.S. and assimilated quickly into American culture, Henderson said. However, they did not lose the ability to speak German, or take on a German accent – a skill that, six months into World War II, the Pentagon decided to put to good use.

“Not only do they know the language of the enemy, they know the culture, the history and the geography better than anybody we could teach,” Henderson said.

The Ritchie Boys often changed their “Jewish-sounding” last names and religious identifications on their dog-tags.

However, when two Ritchie Boys were captured alongside American soldiers as prisoners of war at the Battle of the Bulge, they were identified as Jews by a few German prisoners whom they had interrogated and executed away from the rest of the unit.

“There’s an SS captain standing there,” Henderson said. “One of the recently freed German prisoners runs over to him and says ‘There! There! Two Jews from Berlin.’”

The SS Captain was later tried at the Nuremburg Trials and executed as a war criminal, Henderson said.

“I’d like to leave the readers with what I’ve been left with, and that is ‘never give up hope, and never stop fighting for what’s right’,” Henderson said.

Jane Beal, associate professor of English British literature, said that her great uncle was in the Battle of the Bulge, and that her grandfather was also in the U.S. Army during World War II.

Her knowledge of the Holocaust comes not only from books, films, and documentaries, but also from family and oral history. She said she is most interested in children’s experiences of the Holocaust.

“I think the most common stories people know are Elie Wiesel’s ‘Night’ and ‘Diary of Anne Frank,’ but there’s so much more to it than that,” Beal said.

“This ‘Sons and Soldiers’ is about children taken out of Germany, just like children in Europe were taken out and placed throughout England, who then came back into Germany as soldiers.”

ULV President Devorah Lieberman said that her mother immigrated from Czechoslovakia to the U.S. before the Holocaust.

“I have very few relatives because of that situation, so for me, in my own family, to be able to recognize this every year is personally very important,” Lieberman said.

Betty Green, 70, from Apple Valley, said that when she was in school, there was no mention of the Holocaust, so she had to educate herself.

“I was dating my husband, we were out with a lot of Jewish friends, and it came up in the discussion, and I was shocked that I knew as little as I did. I knew nothing,” Green said. “I think our children today are much more informed.”