By Jocelyn Arceo, Taylor Griffith on November 10, 2017 in LV Life 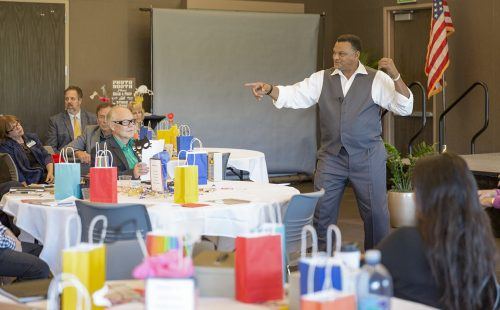 Speaker Randy Powell said social media can play a big role in today’s job market during the Toastmasters Fall Extravaganza event Saturday in the Campus Center Ballroom. The meeting brought members from districts across Southern California. Toastmasters’ goal is to help members improve their public speaking, communication and leadership skills. The University of La Verne’s Toastmasters club meets 5:30 p.m. every first and third Tuesdays of the month in the President’s Dining Room./ photo by Taylor Griffith

Toastmasters International is an organization that helps build stronger communicators and leaders across 141 countries through global conferences and clubs.

“One word can change everything,” keynote speaker Josephine Lee said.

The conference focused on Lee, who won third place in the World Championship of Public Speaking, rising above 35,000 other contestants.

Lee is a 2010 USC graduate with a degree in communications, and joined Toastmasters International to further her education in the field.

Lee was the first Korean woman to ever place third in the World Championship of Public Speaking.

Fresh out of college, she was ready to start her career and applied to as many places as she could.

She said that unfortunately she never heard back from anywhere she applied.

Lee added that she was struggling to find work, and lost ambition as more and more rejections came her way.

“I was angry at my situation, I was angry at the economy and I was angry that my entire life people told me that all I had to do was follow a series of steps, and that would lead me to success,” Lee said. “I did everything I was supposed to, I just didn’t understand how I got stuck.”

At that point she turned to her parents, who owned multiple businesses while she was growing up, for advice.

“They showed me a new perspective, that maybe I shouldn’t see this as a failure, but that I should see this as an opportunity to do something different,” Lee said.

With that advice in mind, she spent the following six months starting up a business that sold ballet shoes, which has now been transformed into a successful nation-wide company that allows her to travel the world doing what she loves.

After Lee’s speech on her pathway to success, Kent Peterson and Randy Powell, two members of Toastmasters International, gave a presentation on the importance of the mentoring program offered by the organization.

“Mentoring is extremely important and in Toastmasters we designate people to be mentors,” Peterson said.

“But everybody is not meant to be a mentor. We lose toastmasters who do not have the right mentors here and it is so important that we keep these individuals and help them learn along the way.”

With this acknowledgment made by Peterson during the event, it led to some “food for thought” from Powell, his partner in the presentation.

“If change is about to come, and pathways are our guide to changing, maybe we ought to consider…” Powell said.

“Since mentoring is so important perhaps we should shed designation and maybe we should start asking people ‘do you want to mentor’ and ‘do you understand what mentoring is,’” Powell said.

With this said, the presentation led to how Toastmasters International acknowledges that there should be more growth in the process.

This would ensure that mentoring is being executed in a more efficient way as to not lose any new members of the organization.

At the end of the event, alumna Mora Zheng said she was able to leave with something new from the speech that Lee had given.

“She is just so confident in what she does and how she speaks,” Zheng said.

“I have trouble with public speaking but seeing her do it so confidently was very interesting.”

The Toastmasters club meets from 5:30 p.m. to 7 p.m. on the first and third Tuesdays of every month.