By Claudia Ceja, Jesica Kimberlin on November 10, 2017 in News 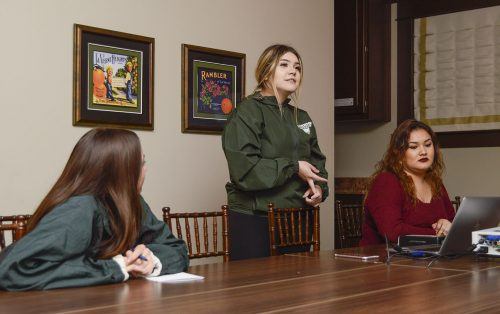 Cynthia Corona, junior business administration major and president of the Dreamers Club, shows how to contact legislators during a Cafecito con Politicos discussion Nov. 2 in the Hanawalt House. Corona explained how to find resources on the American Civil Liberties Union website and how to call to legislators to show support for DACA legislation, or a “Clean Dream Act.” The University’s Dreamers Club encourages all students to be more civically engaged and politically aware. / photo by Claudia Ceja

“What we want to do is create a community of allies and of dreamers, so we can provide social and academic support to the dreamers,” Cynthia Corona, ULV Dreamers club president and junior business administration major said. “We as allies are the ones that can vote and that can change and pass legislation, so we have to use this privilege that we have to make real change.”

The event was held as a collaboration between the club and the Office of Civic and Community Engagement. The topics discussed included how to contact congressional representatives and why is it important to pass the Dream Act of 2017.

“I want to learn more about DACA as well as how I could voice my opinion in politics,” Mobley said.

Corona said that the Dream Act should not be used a bargaining chip to fund Trump’s border wall, increased deportations, border security and increased U.S. Immigration and Customs Enforcement detentions and raids.

Julissa Espinoza, assistant director of the Office of Civic and Community Engagement, said that it is important for people to understand that even though making a phone call or sending an email may seem like a small action, it makes a difference.

“It’s like a trickled down domino effect,” Espinoza said. “One does it, everybody starts doing it, and the ball starts snowballing from there. You can make a difference.”