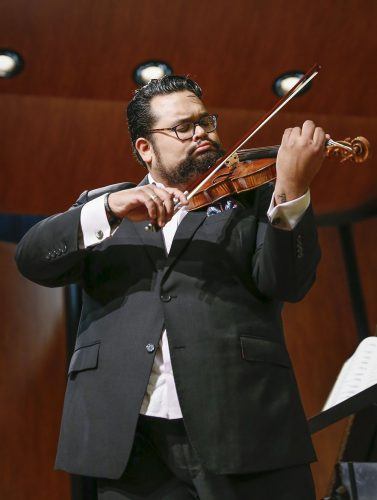 Vijay Gupta, violinist and speaker, dedicates a song by Johann Sebastian Bach to the victims of that morning’s terrorist attack in New York, Tuesday in Morgan Auditorium. Gupta spoke to students, faculty and staff about music and civic engagement, then gave an on-stage violin master class to Jonathan Rios, a senior economics major and music minor who is a sales associate at J. Brown Violin Maker in Claremont. Gupta has been playing internationally since he was 8 years old. He became the youngest person to join the Los Angeles Philharmonic, one of the world’s most recognized orchestras, at 19. He started a nonprofit organization, Street Symphony, which has performed more than 300 concerts to the incarcerated, mentally ill and homeless. / photo by Breanna Ulsh