By Celeste Drake, Jesica Kimberlin on November 3, 2017 in LV Life 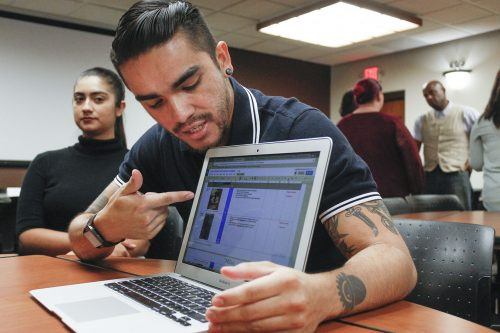 About 20 students and several faculty attended the event, which also offered some before-and-after mingling time and hors d’oeuvres.

“We hope to shine more light on the field of public relations,” said Arturo Gomez Molina, junior communications major and president of the PR Club.

“It gives students a glimpse of what life may look like after they graduate. And it gives some insight on what they need to do to prepare themselves,” he said.

“To buy, to attend, to vote, whatever it is. That’s your job. So the more you know about your audience and the product you have, the better you’ll be,” he said.

Flora Wong, junior communications major, asked the panelists if they had tips on what to include in a portfolio.

“Say you want to go into music, then your whole portfolio should cater to everything you’ve done music-wise,” Williams said.

Soraya Delgado, senior communications major and vice president of the PR Club, said that her favorite part of the panel was how diverse the group of panelists was.

Gomez Molina said that he hopes to bring more such events to campus in future.