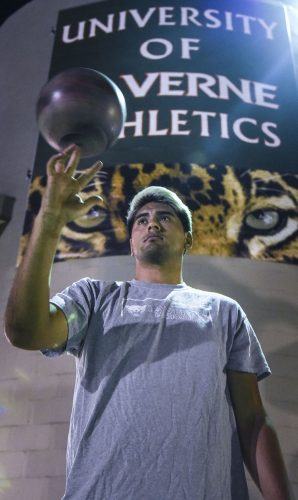 Josh Ramirez, junior kinesiology major and goalkeeper for the men’s soccer team, ranked third in SCIAC save percentage this season with .824, and fourth in saves with 56. / photo by Nadira Fatah

Junior kinesiology major Josh Ramirez tried it all growing up: baseball, football, basketball. He even wished he had ventured into hockey and lacrosse. But Ramirez only truly found his element among the rectangular lines of a soccer field and early father-son memories of the ‘beautiful game.’

“I don’t know what it is, but something about soccer just stuck to me,” Ramirez said. “When I was a baby, my dad used to sit me down next to him and put on a soccer game, and I would just watch attentively with him. If his team scored, he’d cheer and I’d cheer with him, not knowing what was going on, but I always had a passion for soccer.”

To him, the sport’s appeal does not come from the adrenaline of scoring goals, but the opposite. His glory lies in protecting the space between the posts, with a match’s fate literally within reach of his fingertips.

“Goalkeepers don’t get too much attention, but when they do it’s because they did something bad,” Ramirez said.

Previously a forward, he switched to a spot under the crossbar at the age of 12 after a bad season of being unable to score. His father suggested the change of scenery, not knowing it would fit like a glove.

“My very first game I remember I did amazing and I loved that feeling more than scoring goals, so I stuck with goalkeeping,” Ramirez said.

Ramirez played varsity soccer during his freshman and senior years at Pasadena High School and was part of the squad that made school history as the first team to ever make it past the first round of California Interscholastic Federation.

“We actually made it all the way to the semifinals, but in the quarter-finals we played against Claremont and I had probably the best game of my life. That’s how (La Verne head coach) Trevor (Persson) saw me and recruited me,” Ramirez said.

Persson attended the game, and Ramirez’ attention-grabbing performance warranted a chat after the final whistle.

“It was rainy that night, so we were trying to stay a little bit dry, I remember vividly the whole conversation,” Persson said. “He seemed to already have college-ready hands, college-ready physique, his communication was great, and I thought his speed of playing and recognition of Claremont’s attackers was great.”

“I was pretty much set on giving up on soccer because I didn’t have any offers, and then that one game just changed it all. Trevor gave me a chance and I took it,” he said.

Even as a freshman, he earned Persson’s trust and was called to defend the Leopards’ goal from the get-go.

“It was very surprising, I came as a freshman thinking I’m going to be benched and not get any playing time,” Ramirez said. “But somehow coach Trevor saw something in me where he started me.”

Despite the tough competition for the position, Ramirez did not take long to earn his spot and deliver on the expectations.

“Josh beat out a four-year senior and a three-year junior,” Persson said. “As a freshman, to put him through those situations, I thought that would carry a lot of value through the next three years with him.”

Playing with an experienced back line, Persson said Ramirez was able to grow and to establish himself in his position.

“Experience carries a lot of value in our conference, so we wanted to put him in with some older players that would help develop him mentally and physically,” Persson said. “I thought he did a great job and the guys playing in front of him did a good job in trusting him right away, and understanding what he brings to the table.”

The game that immediately comes to mind when thinking of Ramirez, Persson said, is the Southern California Intercollegiate Athletic Conference 2015 semifinal against Chapman in his freshman year. His key saves in the 1-0 win were fundamental to securing La Verne a place in the final against Redlands.

“He came up huge, and playing through an injury nonetheless,” Persson said. “That was his greatest game and where he solidified the trust of the rest of the team, like ‘hey, this kid is good.’”

Persson said he would rate Ramirez’ performance that game as deserving of 10.5 out of 10. “Actually 9.99, or his ego will get… There is always room for improvement,” Persson joked.

“His biggest improvement from a freshman would definitely be his vocal leadership,” Russell said. “As a freshman, he was definitely a little more docile and not as confident, and his confidence has just boosted through the roof.”

Russel said working closely with Ramirez in the defense can have moments of tension, but they can always find middle ground.

“He’s always working with me on getting other guys positioned appropriately. We can sometimes butt heads on defensive strategies, but we always come to a compromise,” he said.

“I think if he can just stay healthy for an entire season, he’s by far the best goalkeeper in our conference,” Persson said.

Looking ahead at his last season of collegiate soccer, Ramirez said he is ready to pass on the experience he’s acquired.

He said he hopes he can be for the youngsters the leader his older Leopard teammates once were for him.

“They definitely passed their knowledge on to me and they helped me as a freshman goalkeeper to excel, and I want to do the same for these new guys coming in,” he said.

Russell said he thinks Ramirez has it in him to become a good influence on underclassmen next season.

“His natural confidence and swagger are probably his greatest assets,” Russell said. “He’s always hard on himself, but doesn’t translate that to other guys and tries to lift his teammates up.”
Persson said he already knows what Ramirez can deliver and expects him to use his experience for guidance, on and off the field in 2018.

“He’s very good at commanding his area,” Persson said. “I always tell him to ‘own your area.’ You have 18 yards by 44 yards to own – so own that area. I’d say his strengths are his communication, his physical presence and his decision-making.”

As for his plans after college, unlike his uncertainty upon high school graduation, Ramirez does not see a future away from soccer anymore.

“After I graduate I just want to see where soccer can take me,” he said. “I want to go to Europe and try out for a few teams, and if nothing happens through that, then I just want to coach. I want to stay in soccer.”