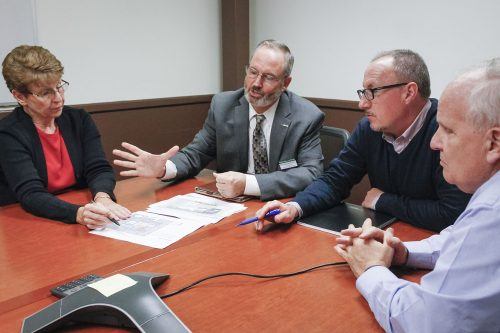 The renovation of Brandt Hall and the demolition of the Interfaith Chapel will make way for the construction of the new Ludwick Center for Spirituality, Cultural Understanding, and Community Engagement expected to open in the fall of 2019.

The center will be located on the corner of Bonita Avenue and B Street. The southern wing of Brandt Hall will be taken down. The building will be renovated and an additional wing will be built, connected to the portion of Brandt parallel to Bonita Avenue with a bridge that connects the second floor. The Ludwick Center will contain a prayer/meditation room, a yoga/quiet room, offices, rooms for student clubs and three new classrooms. The exterior will include a meditation garden and a plaza.

It will take four weeks to determine the location of each building, a stage that Jeanne Cockrell, senior director of capital development, called “schematic development.” Design development, or determining what the building’s interior would look like, will take seven weeks. Construction drawings, or blueprints, will take 10 weeks to complete, and the earliest they can start construction is June 2018.

“They’re going to have a year to do it, which is an aggressive schedule,” Cockrell said. “The resident’s dorm has to be open and ready to go, because we’re taking Brandt offline.”

“The infrastructure for Stu-Han is kind of quickly falling apart, with the electrical and plumbing and other issues,” Provost Jonathan Reed said.

The Interfaith Chapel is not compliant with the building codes of the Americans With Disabilities Act, or ADA, Reed added.

“Any building that was built in the 1950s and 1960s, and has not had major renovation done to it, it will not be up to today’s sizing codes and ADA codes,” Clive Houston-Brown, vice president of facilities, technology and human resources, said. “So they built to the code at the time, and if a major renovation is done, then whatever year you do it, you bring it up to code for that year.”

The Ludwick Center requires a budget of $15 million. $5 million will come from the operating budget from University funds. The other $10 million has to come from philanthropic contributions. As of Nov. 1, the University has received $8,927,665 in cash and pledges, $1,570,732 in irrevocable planned gifts and $2,440,000 in estate commitments.

“If somebody says ‘I’m 80 years old, when I die five, 10 years from now, I have a provision in my will that you’ll get $500,000,’ we document that and put it in another ‘bucket’ so to speak,” Earhart said. “So we don’t have the cash now, but they made the commitment that when they die, that money will be available for this purpose.”

The money from planned gifts and estate commitments will be given to the University at later dates. The University raised a total of $13,023,879 to be used for current funding and future programs.

Women’s basketball falls in opener
Bartelt ranks No. 9 on RateMyProfessors