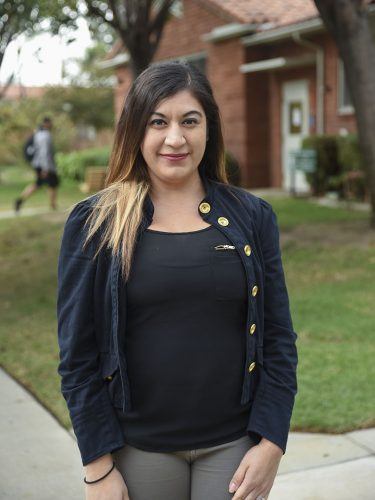 Junior sociology major Vanessa Marquez met her husband in high school after he came from Mexico to the United States illegally at the age of 17. Marquez recently shared her story about her husband’s tumultuous path to legal residency, which included nearly a year of living apart. / photo by Nadira Fatah

Before being forced back to what had become foreign land, Jacob, who asked that his real name be withheld because of his precarious immigration status, had only vague memories of his life in Mexico. The native of Los Mochis, in the northern coast of the state of Sinaloa, found himself hopeless in a city whose future was hijacked by the effects of drug trafficking and lack of opportunities.

At the age of 17, he came to the decision that leaving the life he knew behind and gambling with the odds of a journey out was more feasible than staying, despite the high risks. By himself, Jacob held on to dreams of a better life on the other side of the border through the whole process, even when half of the group he was with got caught crossing the border. Younger and smaller than most, he managed to hide from border patrol officials until eventually making his way to San Diego, finally breathing in relief and fright from the Californian air.

“I asked him ‘were you afraid?’ and he said that he wasn’t until he realized ‘wow, border patrol is a real thing,’” Jacob’s wife, University of La Verne junior sociology major Vanessa Marquez, said. “They were dragging people by their feet, some pushing them down into the ground and arresting them, and he just thought ‘I don’t want that to be me.’”

Years after the journey, Jacob, now married and a father, had to revisit the experience by crossing back the Mexican-American border while awaiting legal residence status. On one hand, he had to temporarily sacrifice the relationship with his family. On the other, Marquez had to support herself, their son and Jacob around 800 miles away through the whole economic, social and time-consuming process.

“You don’t start off in a foreign country, which is what Mexico was now to him, having a job or opportunities available to you, especially when the economy is not as its best,” Marquez said.

Upon starting the application to fix Jacob’s legal status, the couple was aware that he would have to leave the country and that their income would suffer a significant blow.

“We were getting ready to purchase our first home, even risking knowing he wasn’t legal. We had saved enough money to put up a down payment, but all of it went into this,” Marquez said.

Working two jobs to make ends meet, Marquez had to take a leave of absence from Mt. San Antonio College, where she was getting ready to transfer to university.

“I had to sacrifice my education, which to me I’ve always taken pride in wanting to finish college,” Marquez said. “It delayed me a little with some goals that I had for myself and for our family, but I knew that this was a right way to do things.”

The whole process of getting legal status dragged on for two years, with a total cost averaged at $18,000, including attorney’s fees, applications, and travel costs. The personal cost of living away from the his son Kevin for 11 months, however, still stings.

“That really emotionally drained our son. I remember there were nights where it was just very difficult for him to understand why dad… does not live with us,” Marquez said.

“There were so many nights where he would just cry himself to sleep asking for his dad.”

During that year, Marquez visited her husband in Mexico whenever she could afford to, but mostly communicated by phone and email.

“It was pretty much me having to step up to be both mom and dad,” Marquez said.

Toward the end of that tumultuous year, they were told by other immigrants that the package containing the final answer on his status would be delivered by DHL.

“If you have a thin package, that means you did not get accepted,” Marquez said. “The bigger package means those are your papers.”

When Jacob picked up his packet, he had in his hands not only a residency card, but the epitome of freedom allowing him back to his family and life in the United States.

“We drove back in – I even have a picture – it was just really a proud moment for us,” Marquez said.

Today Jacob is firmly established in the U.S., working as a sales manager for an international company for which he travels overseas, including to China. He is also in the process of applying for citizenship.

“Right now he’s actually just waiting on his interview,” Marquez said. “So hopefully by this year or next year, he will be a U.S. citizen.”

The couple has also expanded their family to include 5-year old Kristopher and 3-year old GianKarlo, in addition to now 12-year old Kevin. Marquez has resumed her studies and is set to complete her undergraduate degree in sociology at ULV.

She said her journey to obtain legal status for her husband has impacted her choices.

“When you walk the footsteps of having to live certain circumstances and experiences, it really makes you want to extend a helping hand to others,” said Marquez, who has helped other families with their immigration processes.

People usually move on after their own experience is over, she added.

“Sometimes it’s even taboo. People don’t want to talk about it,” Marquez said. “But then what do you do, being an active agent of society, at the micro-level to help others?”

With that in mind and in the current political climate involving Deferred Action for Childhood Arrivals, or DACA, Marquez recently shared her story in a class taught by Sociology Professor Sharon Davis.

“My mouth was as open as everybody else’s,” Davis said. “One of the beautiful things about that day is I walked out of my own class having learned something that was valuable. I loved that.”

rootsDavis said that after Marquez told her story, she and the students were in awe.

“We had to take this collective pause to regroup,” Davis said. “Students were quite moved, I could tell by their tone of voice and the fact that they were thanking someone for telling a difficult story that she had to endure.”

Davis added that after hearing Marquez’ story, she hopes Marquez’ classmates are empowered to push back and start a dialogue when witnessing discrimination.

Marquez added that it is important to be vocal and to hear such stories because they are real and happen to everyday people.

“I wish that people would understand that we’re all here as a result of someone being brave enough to leave the circumstances that they had in their home at one point,” she said. “We all have history attached to our roots, and it’s so important that people don’t dismiss the sacrifice that a relative or an ancestor did to get to this country. Everyone carries a story, everyone has a root of somewhere other than the U.S., unless they’re Native-American.”

“Many of us don’t remember those journeys,” Davis said. “Because our ancestors made those journeys, and now that we’re here, we think we’re entitled because other people’s ancestors are making the journeys now. But just because we got here earlier doesn’t mean we get to be prejudiced.”

The waiver of unlawful presence, Effron explained, is a fundamental distinction in the process of fixing immigration status. Effron debunked the myth of ‘anchor babies,’ which some believe are a loophole in the path towards residency.

“A lot of people talk about those who have kids born in the U.S. and they’re anchor babies, ‘now you can’t deport them,’ and that couldn’t be further from the truth,” Effron said. “If you’re here illegally, you have a kid born, they’ll say ‘fine, take the kid with you, the kid is still an American and can come back.’ That does not stop a person from being deported.”

Marquez said she hopes people learn from her story that immigrants are competent and willing to enrich the country with their strengths.

“It’s important that they understand that we want to become educated because we’re capable of it, and at the same time we want go into a profession to contribute, to make this beautiful country what it is,” she said.