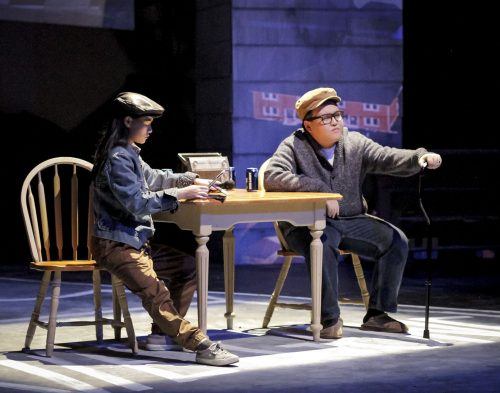 Juniors Damairis Lao and Xingda Zhu perform in “Vietgone” Friday in Dailey Theatre. The play , which tells tthe story of two Vietnamese refugees who fell in love in a refugee camp in the U.S., runs through Sunday. / photo by Spencer Croce.

A blend of music, comedy and drama filled Dailey Theatre as a crowd of 50 attended the opening night of “Vietgone” on Thursday.

“It’s a fairly new play, and what I like is the brand new voice,” director Alma Martinez said. “What we’ve got is the first generation of Vietnamese-Americans talking about Vietnam and the war from a South Vietnamese perspective, and that’s exciting.”

The opening scene was an introductory message from the playwright Qui Nguyen, played by junior art and art history major Damairis Lao.

The story started with a musical rap from Quang Nguyen, Qui’s father, a helicopter pilot during the Vietnam War, played by junior psychology major Xingda Zhu. He was riding a motorcycle with his best friend Nhan on a road trip to California. Throughout the play, flashbacks explained the reason for their excursion.

The first went back to four months earlier, where the audience was introduced to Tong Thi Tram, played by freshman anthropology and French major Angelyn Mendoza. She went to America with her mother to escape the war in Vietnam, ending up at Fort Chaffee, a refugee camp in Arkansas. For Tong, America was a fresh start where she could live free of the constraints of Vietnamese cultural standards.

“When you see Asian characters in any type of media they are usually seen as submissive or quiet,” Mendoza said. “But this play turns that around because my character is the exact opposite.”

Quang and Nhan flew a group of Vietnamese citizens out of the fallen Saigon to a ship en-route to America, forcing Quang to leave his wife and children behind. Quang and Tong met at the camp, and started hooking up casually. The two developed feelings for each other, but never took action since Quang left for California to go back to his family.

Once they reached California, Nhan told Quang the reality of what awaited in Vietnam if he went back.

“My favorite part was the intensity; all the dialogues and monologues had a reason and a motive for it,” graduate student Eduardo Fernandez said. “It really showed the cultural disparity of the Vietnam War.”

Quang and Nhan went back to Fort Chaffee, where Quang and Tong reunited and started a new life together.

The final scene was set in present day with Nguyen interviewing Quang about his involvement in the War. Quang avoided direct answers because most remember the War as “America’s biggest mistake” rather than focusing on how the Vietnamese overcame adversity.

“I liked the ending because he (Quang) explained from his point of view about how he felt about war,” junior kinesiology major Mary Jane Amaaya said. “I think it showed how veterans feel when they are asked to recall their memories.”

Nguyen then understood what his father meant, ending the play with both men drinking and singing one of their favorite songs.

“All the emotions we experienced during the play, I want the audience to take with them when they leave,” Zhu said. “Whether they are feeling happy because of all the comedy or heavy because of the truth in the last monologue, I want them to remember what happened in this show.”