By Breanna Ulsh, Vanessa Martinez on December 1, 2017 in Arts, Etc. 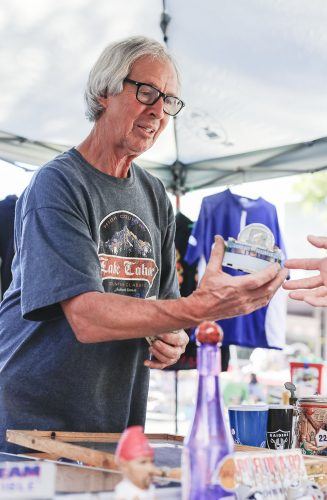 Bob De La Garza, who has worked as a set dresser on many films and television series, sells a snow globe to a customer at the Collectors Street Faire in downtown Pomona Saturday. De La Garza has sold his sports collectibles there for about 10 years. The Collectors’ Street Faire is held the last Saturdays of January, March, May, September and November on Second Street’s Antique Row. / photo by Breanna Ulsh.

Antique stores in downtown Pomona’s Antique Row displayed old valuables and nostalgic trinkets for the bi-monthly Collectors Street Faire Saturday, where visitors could view such finds as a vintage coffee blender, a 1940s mini-perfume set and a retro jean jacket.

“I find linen and soak them in soap until they are clean and I hang dry them in the California sunshine,” Hernandez said.

She said that the cloth reminds her of an older generation’s lifestyle.

“In the 1960s, I grew up using cloth napkins and real table cloths,” Hernandez said. She added that she lived a eco-friendly lifestyle as a child and now.antique

“(Selling antiques) is a hobby of mine that … I love very much,” Dora Miranda, another vendor said.

Miranda, who has been collecting for more than 25 years, sells antique furniture and home decor at flea markets.

“I became a stay at home mother, and I started to collect antiques and decided to make it my main job,” Miranda said. She added that she motivated her daughter to study interior design in college.

“Antique faires are a very good way of seeing what is available,” said Yvonne Rodriguez, who was looking for collectables Saturday. “I have a large collection of dolls which have their designated room in my house,” Rodriguez said.

She said she also has a collection of around 1,000 salt shakers on a shelf. “The living room looks like a museum,” Rodriguez said.

“I have been to this faire before … and every time I find a variety of interesting items,” said Robert Rodriguez, who joined his wife, Yvonne Rodriguez.