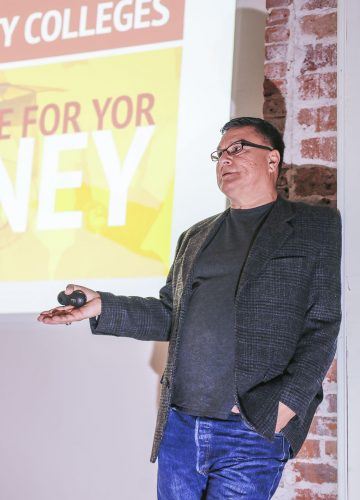 Simón Silva, author and artist offers his definition of creativity and discusses its benefits Friday at Café con Libros, a non-profit bookstore in Pomona. The bookstore focuses on literacy development and offers various programs. Silva hosted a creativity workshop at the bookstore the next day. / photo by Breanna Ulsh

In the back of a brick-walled Pomona book shop, author and artist Simon Silva spoke about the importance of cultivating creativity in the youth to an audience of 14 guests Friday.

Adelaide Bautista, vice chairwoman of the book shop Café con Libros, opened the lecture by saying that the store, located at 280 W. Second St., reopened Oct. 7 as a nonprofit organization.

Bautista introduced Silva, and Silva segued into his lecture about creativity by asking the audience a question.

“How many of you here consider yourself to be creative individuals?” Silva asked. No one in the audience raised a hand.

Silva said that most people confuse creativity with a natural talent for painting and drawing.

He added that our education system considers the arts to be secondary and that schools are devoting their time and their funds toward teaching children how to code, which could work toward the younger generation’s detriment.

“What’s going to happen when everyone and their grandmothers know how to code for apps?” Silva asked.

Silva said that it is not coding, but creativity – the ability to find new ways to use one’s accumulated knowledge – that will make the next generation “indispensable.”

Silva shared his story of being born in the border town of Mexicali and growing up in a family of migrant workers.

In the summer, his alcoholic father made him and his siblings work in the fields picking berries.

The rest of the year, Silva went to school, treating it as a haven when he needed to escape his abusive household, he said.

“I went to school because I felt safer there than I did in my own house,” Silva said.

His experiences in the fields and conceptualization of school as a haven made Silva want to attend college.

Silva earned his associate’s degree at Imperial Valley College and studied illustration at the Art Center of College and Design in Pasadena.

His introduction to Chicano literature allowed him to establish an identity and find inspiration for his artwork, he said.

He said that his father’s initial disapproval of his wish to attend college stemmed from a misunderstanding of education’s purpose.

While his father’s misgivings stemmed from the idea that a paying job was more important than a diploma, most parents today only value education if it provides a single stable career, he said.

“Many of us have corrupted our children by focusing on a singular aspect of who they are,” Silva said.

Parents further “corrupt” their children by stifling their creativity, he said.

This happens when children draw things, like two legged stick figures without arms or torsos, their parents do not immediately recognize that as creative and instead deride the drawing as lacking in quality.

Sometimes, people dismiss abstract art by derisively saying “my child can do that,” Silva said.

This stifling of creativity also occurs when teachers look at their students’ art solely through the perspective of child development; when a third grade child still draws in stick figures while others are producing more advanced art, the teacher would immediately suspect that he or she is developmentally behind.

Silva distinguished creativity from talent, which he defines as the mastery of technical craft; something that can be learned. In defining creativity, Silva quoted educator Tony Wagner:

Creativity is already inside a person, it just has to be explored.

Sandra Alamo, 43, from Eastvale, said that she agreed with Silva’s perspective on the restrictive nature of public schools, and that her children flourished under a different educational program.

“My kids went to Montessori,” Alamo said. “It’s just a different philosophy, my kids could spend as long as they wanted to on a subject.”

Silva said that his own creativity grew when he expanded beyond his own cultural origins and sought inspiration from diverse sources from multiple cultures.

Bautista said that while drawing inspiration from other sources is important, there is value in establishing one’s identity in his or her own culture.

“I think it’s a necessary part of the process, but I think when he expanded beyond the ‘Latino’ lens, he grew more,” she said.

Patricia De Robles, chairwoman of Cafe Con Libros, agreed that there is importance of an established cultural identity.

“It makes sense,” De Robles said. “You start where you’re rooted and then you grow.”

Ensemble ‘comes together’ for Beatles tribute
Major shaming is shameful