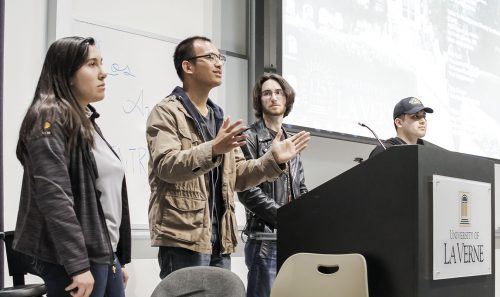 Senior legal studies major Karla Magana, junior political science major Jackie Ku, junior political science major Austin Denison and senior TV broadcasting major Edward Romero answer questions following a presentation of a short documentary they produced for their honors senior seminar class. The documentary presented the issue of gentrification, which is when a neighborhood is opened up for development and long-standing residents are forced out. The students focused on the gentrification of Chinatown in Los Angeles and gave an overview of other communities that are also facing gentrification. / photo by Spencer Croce

An intimate crowd was taught an eye-opening lesson about gentrification by La Verne honors program students Nov. 29 in the La Fetra Lecture Hall.

The students spoke about what gentrification is and how it has played a role in many countries around the world, specifically how it is affecting the people of Los Angeles.

They also spoke about their experience during their time at the 11th annual United Way Homewalk in Los Angeles.

Senior legal studies major Karla Magana explained that the short lecture was a part of the group’s senior project.

The group spoke about gentrification as a global phenomenon and described how it played out during the 2016 Summer Olympics in Rio de Janeiro, Brazil.

There was controversy leading up to the widely viewed multi-sport event because of the good image that was to be portrayed of its hosting city.

Many surrounding areas were demolished and residents were pushed out within the Olympic Ring in order for it to be pacified, and forced to make their own shanty towns.

“Our third project is focusing on gentrification and how it affects home,” said Magana when explaining the senior project.

She added that their project was a part of a three-tier system, where the first was focusing on gentrification around the world and the second was to focus on the social issue in the United States.

Magana said that based on their research, they have found that gentrification started from the heart of downtown Los Angeles and is spreading outwards towards the outskirts of Chinatown and other areas like Boyle Heights.

“All of these people are being pushed east toward San Bernardino, which creates those areas that become crime ridden and just become much worse areas,” said Magana.

The presentation started with a video solely produced by the students.

Beginning with a definition of gentrification, the video touched on how Los Angeles’ cultural diversity is at stake because the people who make up the ingredients to the cultural boiling pot are being pushed out of their homes and into other cities or towns with more feasible rent.

According to the students’ presentation, the average rent in downtown Los Angeles is $3,000, which Magana finds to be personally inhibiting.

“It hits personally because as millennials, we try to buy homes and we can’t because all of these bigger projects have come in and built these giant buildings where rent is completely unaffordable,” said Magana.

Although there is a negative connotation to gentrification, positive outcomes have been proposed.

“Positives from gentrification would be general updating of buildings, new buildings and more space for people to live,” said junior political science major Jackie Ku, who was a part of the honors program along with Magana.

He added that with places like Chinatown, the rent is relatively cheap, which is why large corporations buy the land.

However, it pushes out the residents who do not have the resources to economically fight back.

“When you give them that small boost – that’s really the helping process. It’s helping the people along as you grow,” said Ku.

There was an overall consensus that gentrification has the ability to be positive among the group.

How developers will choose to go about taking care of the existing residents will be the deciding factor on how well the projects will go in the city of choice.

Denison said that upgrading cities is inevitable but developers and the people making the decisions to beautify areas are going to have to make a choice between how nice they will make the buildings and how much they choose to charge residents to use them.

“They’re going to have to find a balance or just not do it,” said Denison.