By Mark Acosta, Nadira Fatah on December 1, 2017 in Sports, Volleyball 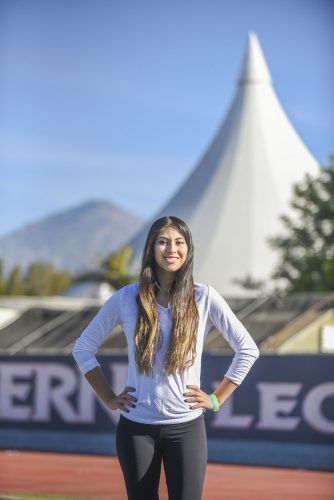 Rojo’s success on the court helped the Leopards capture second place in conference and reach the semi-finals of the SCIAC tournament with a record of 11-5, and 18-9 overall.

After the season ended, Rojo received several accolades for her individual success.

“It was honestly shocking,” Rojo said. “Last year I got second team (All-SCIAC) and this year my goal was to be on the first team, and I expected that. I did not expect anything else.”

Rojo was recruited by many universities out of Los Altos high school in Hacienda Heights, but chose to attend San Francisco State, which has a Division II volleyball program.

After a coaching change at San Francisco State, Rojo came back to Southern California and transferred to La Verne as a junior.

“I emailed Jenna (Panatier, the volleyball coach) and she showed me around the campus,” Rojo said. “I was recruited by her out of high school, but I knew nothing about La Verne.”

In just two years, Rojo amassed 540 kills, and was one of two seniors on this year’s team to rank as high as No. 14 in the country.

“Marisa was definitely our go-to outside hitter,” junior setter Natalie Barragan said. “I could set the ball to her every single time and know she was going to put it away. She led by example and people looked up to her.”

Playing at La Verne, Rojo was also able to play alongside her sister, Mireya Rojo, who is a sophomore outside hitter.

During the season, Mireya was diagnosed with lymphoma, and from that point on, Marisa Rojo played the rest of the season in honor of her sister who could not be on the court with her and the team.

“I played for my sister and my team,” Rojo said. “I tried not to put pressure on myself because it was my senior year and I wanted it to be fun.”

Going through adversity on and off of the court showed Rojo’s character, according to her teammates.

Freshman outside hitter Kiana Valdiviseo was one of the players that said she watched and learned from Marisa Rojo.

“Her maturity and mental strength on the court is something I learned from,” Valdiviseo said. “Since she had the most experience, she mastered her focus on the court. She reminded me that college goes by so fast and you have to go all out when you’re playing because at one point it comes to an end.”

Now that her athletic career is now over, Rojo said it is weird having free time to work and do other things.

She no longer goes to weight training or worries about practice.

Marisa Rojo will graduate in February, and said she plans on returning to Los Altos as an assistant volleyball coach.

She said she wants to take time off to study for the Graduate Record Examinations for graduate school.

Rojo wants to pursue a master’s degree in occupational therapy, to one day be able to work with children who have special needs.