By Dorothy Gartsman, Madison Rubino on December 8, 2017 in Arts, Etc. 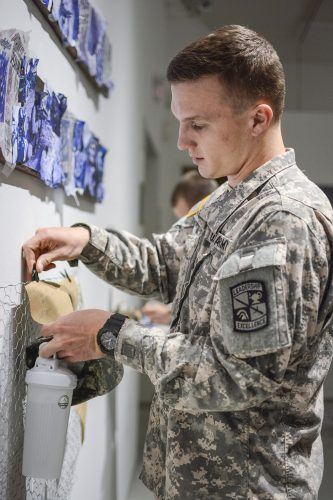 Freshman kinesiology major and Army ROTC member Matthieu Ionesco came to see Allissa Wahl’s work, “III Percent,” which portrays the lives of people in the line of duty, at the senior studio art exhibition. The reception was held Tuesday for Berenice Gonzalez, Mengnan Hong, Danica Jones and Allissa Wahl in the Harris Art Gallery. Wahl used worn down and distressed graphic images, some from news articles about 9/11. Viewers wrote messages and attached them to a long section of poultry wire suspended on the wall beneath the images. / photo by Dorothy Gartsman

Viewers filled the gallery to observe the students’ artwork while the artist stood by their respective pieces to answer questions of those who were curious.

“I wanted to show a girl who is in her own world, which is why she is shown dancing underwater,” Gonzalez said.

“I wanted others to see that her world was different from theirs. My work reflects the things that go unnoticed, not just something that people do not think is that interesting at a glance. I want people to take a few seconds to look and observe, not just walk by like there is nothing.”

Gonzalez said she used a 14 year old family friend as the model and dancer for this piece.

Jones included her art piece “Reflecting Reality” that showed a broken mirror with a ghost-like figure reaching out for help while other shattered mirrors circled the floor around it.

“Originally my piece was supposed to contrast realistic renaissance fine art with cartoons and then it gradually become the idea behind reality, what is real and what is not,” Jones said. “My piece depicts social isolation because on social media and in real life people cry out for help and other people witnessing this pain just walk by them and don’t help. My piece shows someone reaching out through the mirror for help and you can see them in pain but they’re still scared.”

Her art was described as a reflection of her childhood while also incorporating the aspect of Chinese art.

The senior art exhibit also included an interactive piece called, “III Percent” created by Wahl, which showed a stained board of images of those who serve in the line of duty including law enforcement, firefighters, paramedics or military personnel.

Below the piece, art admirers were given the option to write their own comments on the controversial issues surrounding this topic to create an open conversation.

“I created this as my senior project because it relates to me very personally,” Wahl said. “My uncle, who is in the military and many of my close friends in the police department are all pictured on this board.”

“My exhibit represents the idea established behind the Royal French Art Academy of Painting and Sculpture established in the 17th century and how it has influenced public taste,” Gonzales said.

“Today when artists are trying to do something a little more expressive, it’s almost a necessity that they have some type of academic background to justify their expression,” she said.

Gonzales chose the work of six student artists whose paintings were hung in order of those that represented prompted art, such as stills and figures verses non-prompted art, which involved more creative expression.

Throughout the course of the semester, the art majors worked together to design their senior projects and develop them into an exhibit to showcase their hard work.

“All semester we developed our pieces individually while still helping each other decided what we wanted and what we were going for,” Jones said.

Madison Rubino can reached at madison.rubino@laverne.edu.