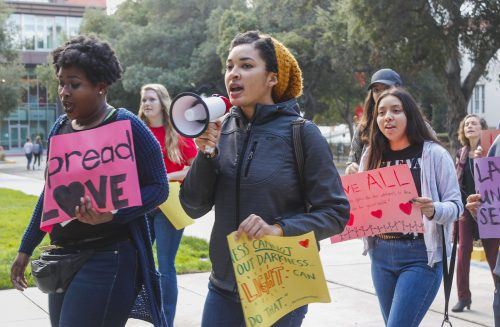 Contagious messages of love and positivity spread across Sneaky Park in the form of colorful signs and uplifting music, as honors students held “Dissipate the Hate,” a senior project event 11 a.m. Monday to educate the University community about hate speech. Students then voiced their support for targeted groups by participating in a march around campus, preaching inclusivity and advocating for equality.

The event was organized by senior honors students kinesiology majors Jason Souriolle and Taylor Davis, journalism major Brooke Grasso and biology majors Jenna Damon and Nahiely Torres.
Before helping themselves to Hawaiian barbecue, participants stopped by booths hosted by clubs and organizations to learn about the different ways hate speech affects specific groups and how to combat it.

“We are bringing awareness to hate that Latinos face, for instance what Trump is promoting with building the wall because Latinos are stereotyped as rapists and criminals when that is not the case,” said junior business administration Henry Jimenez, from the Latino Student Forum.

“We are hard working, we’re family-oriented, we’re loving and caring people and what Latino Student Forum does is it helps advertise that. It helps bring the community together to show who we truly are and to break every stereotype that anyone has put upon us.”

Apart from LSF, representatives from the Black Student Union, I Am That Girl, Gender-Sexuality Alliance and Center for Multicultural Services were also present.

Two booths were equipped with art supplies and attendees were encouraged to make signs to participate in the subsequent march.

“For this generation I think it’s very important to at least be aware of (hate speech) just because there is a lot of hate, not just in America but all over the world, so it’s good to have these kinds of events to remind people that they are still loved,” said sophomore art major Roiann James.

James’ sign focused on positivity and reinforced the power of love to counteract hate.

“I’m a Christian so I believe that everybody should be loved no matter what race, gender, or their beliefs are, no matter who they are. They have to be loved and they will be loved so I wanted to spread that, so I just simply put ‘You are loved’ and that’s all they need to know.”

Junior education major and CAPA student Melanie Martinez wrote “Where is the love?” in black, bold letters on her light pink sign, and agreed that it is important to have events like these and a platform to discuss hate speech.

“I’m very glad to see that there’s an event going on addressing it,” Martinez said.

Honors student Taylor Davis said that the reason behind choosing the topic of hate speech and white nationalism for the group’s senior project came from the current political and social climate in the country.

“We see a lot of things happening in the U.S. that are just really hard to believe, so I wanted to get more educated and I wanted to educate our campus more about all of that,” Davis said.

“I learned that a lot of people in the U.S., especially us being in Southern California, aren’t aware of the effects of white nationalism in our community because they think these things happen more in other random states. And the KKK is still in Southern California and throughout California, so that was surprising to me and I wanted to let everybody know about that.”

“In this country we do value and know the importance of free speech, and it is something to be protected, but hate speech although it may be legal in many cases is dangerous and a violent form of speech,” Wagoner said. She added that hate speech often draws upon systems of oppression, discrimination and exploitation.

“Hate speech is not innocent or just another perspective, it has a violent purpose and it’s important that we know and feel the difference, which is why today’s event is so important,” Wagoner said.

She added that although in same cases hate speech may be legal, it does not mean we should consent to it, and that the conversation should not focus solely on free speech but also on the type of society we want to build.

“We all have a role in shaping decent and love and relationships among us,” Wagoner said. “Our resistance to expressions of hate is the affirmation to use speech wisely and carefully for the sake of love, and justice and our common life together.”

Fueled by Wagoner’s words, students kicked off the march around noon and were lead by senior journalism major Tyler Evains.

The march spread across C Street, Third Street, D Street and Second Street and echoed around campus through chants that included “Spread love, not hate,” “No hate, no fear, everyone is welcome here.”

“At first I was nervous because I never had to lead a march, I’ve only really been in one or two,” Evains said. “I think it’s important to let people know what exactly hate speech is, the targeting certain people and groups, especially in college where there’s so many different types of people and backgrounds.”

Evains also said that while being vocal about issues has much value, activists need to be out and participate actively to push for change.

“You’re not being an activist if you’re not acting and going through the things that people you’re fighting for are going through,” she said. Evains also added that the participation of people with a bigger platform is required to really make a difference.

Issac Carter, assistant professor of education, shared his thoughts on the origin of hate speech and how it is allowed to progress in society.

“I think it’s very important that we take a stance against the issues of hate on our campus and the language that we speak, but I also want us to consider the way hate manifests itself,” Carter said.
“It starts with prejudice, it starts with us simply understanding how we’re socialized.”

He also encouraged participants to think critically on the actions they can take to combat it.

“So I hope we can really address the precursors to hate, what are we doing in our education, what kind of classes do we offer, does the campus reflect its mission… Those are the precursors of hate because if ignorance is allowed to exist, hate will manifest and thrive.”

Debate takes crown at championships
On the Calendar