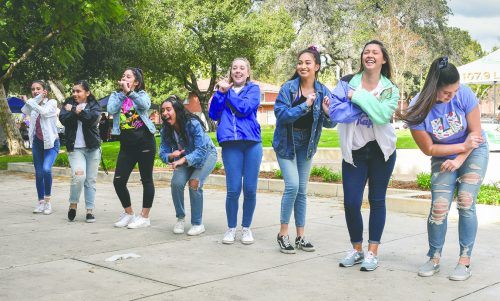 The spring semester club fair welcomed back the last generation of 1990s kids Monday afternoon in Sneaky Park, with the theme of 1990s cartoons, movies and music of their childhood.

More than 50 campus clubs were represented at the fair and club representatives manned their booths to answer questions about their organizations.

“(It was) a great opportunity for students to acclimate to the institution and further enrich college experience, personal growth and leadership skills,” said Cindy Vallejo, student life operations coordinator.

“Also, it is important for clubs and organizations to showcase their club, purpose and recruit,” she said.

Students walked between booths to learn more about the dozens of clubs and organizations that La Verne offers.

LeoFM informed students of the upcoming activities, gave out prizes and introduced the La Verne dance team, which performed during the event.

The fair also hosted food trucks from The Habit and L&L Hawaiian Barbecue, who provided free food to attendees.

The group hosts social activities that focus on how to become successful in the world of business.

“Our focuses for the club are to build a strong resume, to manage a business and learning how to put yourself out there,” Lopez said.

Delta Sigma Pi also advises students on the proper way to dress during a business meeting or interview.

“Club fair (offers) a chance for clubs to try to recruit people and get them involved on campus,” senior anthropology major Billie Guerrero said.

The students of La Verne had the opportunity to create and build friendships alongside finding clubs that could further their interests.

“I actually knew people from these clubs, so I was really compelled to join and I also like working for non-profits,” said Wehbi.

By providing a variety of clubs to choose from, the fair had many benefits for students from different backgrounds.

“A student can find their sense of belonging; it’s a great way to network inside and outside of your major,” President of Enactus Melanie Browdy said.

Vanessa Martinez can be reached at vanessa.martinez@laverne.edu.

Letter to the Editor
Event focuses on education equity