By Dorothy Gartsman, Jocelyn Arceo on February 16, 2018 in News 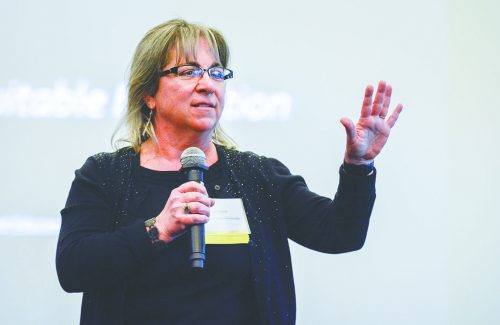 Mary Earick, director of the Holmes Center for School Partnerships and Educator Preparation at Plymouth State University, discusses “whiteness” and how to create equitable education opportunities during the “Building Bridges and Coalitions: The Power of Intersectionality” conference sponsored by the LaFetra College of Education Saturday in the Campus Center. Earick also spoke about the problems that sometimes arise when educators from white middle-class backgrounds give students of color a confusing self perception based on their choices of class materials./ photo by Dorothy Gartsman

Mary Earick, director of the Holmes Center for School Partnerships and Educator Preparation at Plymouth State University, discussed “equitable education through the critical studies of whiteness.”

Earick spoke during the LaFetra College of Education’s inaugural conference, “Building Bridges and Coalitions: The Power of Intersectionality,” in the Campus Center Saturday.

“White ways are the white supremacist systems that we currently live in,” Earick said. “We all need to understand this process of resisting, responding, and reframing because this is … proactive.”

Analysis of such systems is necessary to bring racial equity to the classroom, and thus equitable education, she said.

Earick established equitable education through a formula of “Resist, Respond, Reframe.” She used this method in the past to establish a racially balanced kindergarten classroom.

“Maybe we don’t understand each other totally right now, but if we’re focusing on that problem of practice, then we’re all interested in the same result,” Earick said. “If we start doing this, we can start reducing inequities and racism.”

Nolan Cabrera, associate professor in the Center for the Study of Higher Education at the University of Arizona, who also spoke at the Saturday conference, discussed the Tucson Unified Mexican American Studies case, Arce v. Douglas.

“There was this massive wave of anti-brown, anti-Mexican, anti-basically anything that’s not white in Arizona,” Cabrera said.

The first attempt to eliminate Mexican-American studies from the school curriculum was in 2008, after high school students participated in a silent protest during a mandatory speech where they were not allowed to give feedback, Cabrera said.

This led to 11 Mexican-American studies teachers filing a lawsuit against the state of Arizona for infringing upon their first amendment right, as well as multiple student protests that included stopping board meetings, silent protests, and walkouts, Cabrera said.

After multiple court dates in the years ranging from 2010 to 2015, a final trial in the summer of 2017 ruled that the elimination of Mexican-American studies was a direct violation of the first and 14th amendments, Cabrera said.

In December 2017, a permanent injunction was declared and an appeal was denied in January. The case was over, and the fight for Mexican-American studies was won.

“We thought there was inequity inside of that model,” Bechard said.

“So we decided to challenge that.”

In order to challenge that set up, they began hosting joint Socratic seminars for their two classes, said Bechard.

They first began with meager topics, such as dress code, as a way to ease into discussion. Gradually, Bechard explained, they were able to move onto more controversial topics.

As the topics became more controversial, students began coming forward wanting to discuss topics on gender identity and sexuality, something of which neither had any experience in, said Bechard.

“There is a big lack of research, it’s actually non-existent, on how teacher preparation programs and teacher development programs can accommodate students who don’t identify as a binary gender in their classroom space,” Moore said.

In her research, Moore found that any education regarding such controversial topics like gender and sexuality must be relatable to their individual schools and come from not only the district as a whole, but from the teachers within the community themselves, she said.

There also must be familiarity with key terminology that most teachers are unaware of, such as pansexual and non-binary, said Moore.

“Higher ed educators can come together with K-12 educators to keep this conversation going.”