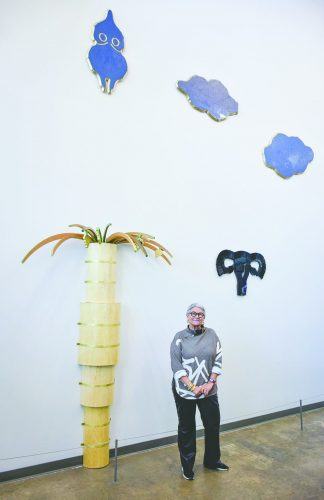 “The Expulsion,” by artist Etchi Werner-Nyiri, tackles the stigma of women and childbirth. Her piece focuses on the exile of Adam and Eve from the Garden of Eden and the consequences that cursed women to painful childbirth. The exhibit is on view in the Tall Wall Space in the Arts and Communications Building.

‘The Expulsion,” created by sculptor Etchi Werner-Nyiri, was installed onto the Tall Wall Feb. 5.

The exhibit is modeled after a woman’s reproductive system.

There are nine different pieces that include large, orange plastic uteruses binded together. Smaller black uteruses hover on each side of a palm tree placed in the center, with blue clouds floating above.

The different elements of “The Expulsion” are meant to symbolize the Garden of Eden and Adam and Eve’s forced exile.

Besides exiling Adam and Eve, God punished Eve by sentencing her to a painful birthing experience.

“The exile from paradise is happening whenever a baby is born,” Werner-Nyiri said.

When a baby is born out of the womb it becomes exposed and must face the reality of the world, just like Adam and Eve.

Werner-Nyiri said she was occupied by the subject of feminism and took about three or four months coming up with the idea for “The Expulsion.”

The entire process of choosing a direction to take and preparing the artwork took her about seven or eight months.

During that time, curator Sagi Rafael contacted Werner-Nyiri to bring her from her current residence in Tel Aviv, Israel, to La Verne to present her artwork.

“(Etchi) has created both a narrative and an environment,” Johnson said.

“As an art professor, I get some of the references that are more about Picasso or art history, though not every student has that prerequisite coming into seeing the work.”

He said he ultimately feels that Werner-Nyiri’s work is an invitation to a visual experience, and that “The Expulsion” is enough to be curious about or be encouraged to take a closer look.

“I love when people find inspiration in stories most of us grew up hearing and make it into their own,” sophomore business administration major John Ceja said.

Sunny Blake, sophomore political science major, said that while she appreciated the artwork she found it to be random to have it shown in an academic setting.

“The great thing about art is that every individual can see it and understand what he or she sees in a different way,” Werner-Nyiri said.

She said she hopes that students will enjoy what they see and that it will make them think.