By Amanda Gabriela Beltran, Cortney Mace on February 16, 2018 in News 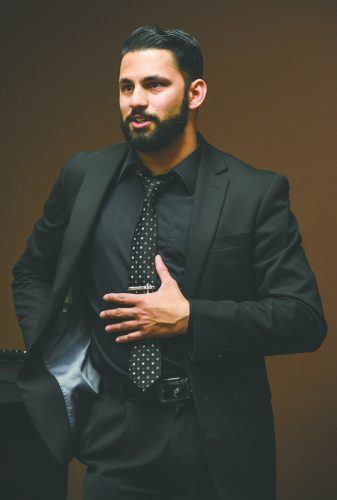 Chris Smith, criminology tutor at Chaffey College, spoke on “The Assassination of Trayvon Martin By the Coward George Zimmerman,” Feb. 9 in the President’s Dining Room. The speech was sponsored by the Center of Multicultural Services and the Black Student Union as one of the events held during Black History Month./ photo by Cortney Mace

University of La Verne students and faculty gathered for a Black Lives Matter discussion Monday in the President’s Dining Room to examine how the murder of Trayvon Martin in 2012 illustrates prominent racial issues in America.

Chris Smith, criminology tutor at Chaffey College, led the discussion in light of Black History Month. The conversation focused on the mishandling of Martin’s case which Smith said ultimately mirrors racial problems African-Americans face today because of institutions of authority in America.

“Ultimately, it started with poor canvasing which led to Martin being admitted to the hospital as a ‘John Doe’ even though he lived in the neighborhood,” Smith said.

Authorities also followed up with witnesses in an unorthodox way, Smith said.

“The police gave one of the witnesses, who was a small 7-year-old boy, a multiple choice test instead of hearing his account of what he witnessed,” Smith said.

Throughout the investigation and hearings, authorities continued to create a stigma surrounding the sort of person Martin was. Smith said fake photos of Martin circulated the internet portraying him as a thug, which was far from the truth.

“The media is so effective about building prejudices about male black teens,” Smith said.

George Zimmerman, who had shot Martin, was not portrayed as such, despite having many charges against him, including assaulting an officer and domestic abuse.

“The idea that George Zimmerman was a concerned citizen and forced him to shoot him was a really powerful narrative,” Smith said.

Smith said Martin was being stalked by Zimmerman for no apparent reason before the fatal shooting.

Zimmerman was part of his neighborhood watch group, and was on patrol the day of the shooting.

Junior critical civic and community engagement major Rudy Amaya is part of the Black History Month planning committee and learned about some aspects of the situation.

“The Twitter post that George Zimmerman posted a year ago about Trayvon Martin’s death, I think that was very shocking because it just goes to show that not only did he do that, but that society can accept he did that,” Amaya said.

Sophomore biology major Katie Scully said she did not know the details of the case before the discussion, but was shocked to learn about Zimmerman’s true character.

“It was shocking to me that Zimmerman had all of these allegations and charges against him and they were never emphasized in the media,” Scully said.

The Black Lives Matter movement did not necessarily start with this case, but it did catapult after it.

“Michael Brown kicked it off, but Trayvon Martin was the high profile one and the examination of George Zimmerman threw it into high gear,” Smith said.

These cases are often used to discredit the movement in the media, especially the Michael Brown case, which ultimately started the movement.

“People tried to validate the murder of Michael Brown, saying he was at fault and the officer wasn’t, which makes others say ‘It’s all based on a lie, based on a myth, you can all go home now,’ type of mentality,” Smith said.

The purpose of these types of discussions on college campuses is to inform, Amaya said.

“Being informed enough to make sure that it is interpreted correctly and that we approach the situation when others talk about the Black Lives Matter movement in a way where we’re coming from understanding how society usually, because of the permanence of racism, tends to criminalize anything to do with black liberation or black upward mobility,” Amaya said.

Many audience members said they agreed that in order to make the changes we want to see in our society, we have to have these hard conversations.

City votes to change LVFD positions
On the Calendar