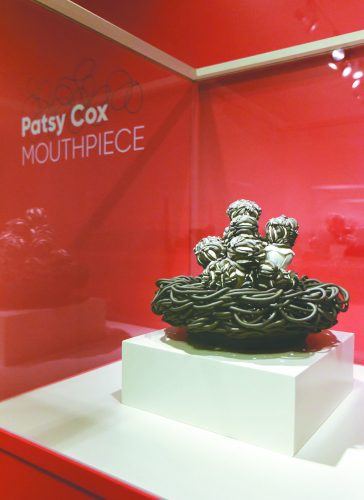 “Polyphonic Hush” is one of 12 ceramic pieces in the “Mouthpiece” exhibit by Patsy Cox at the American Museum of Ceramic Art in Pomona. Cox’s work reflects personal reactions of shock and confusion toward changes in long-held perceptions of freedom and liberty in the current political environment. Cox began the series after the presidential inauguration in 2017./ photo by Claudia Ceja

Each of the exhibit’s 12 pieces feature variously shaped coils and mouths.

“Many, Many, Many” is a collection of black clay mouths and coils intertwining within one another, while sitting right on top of coiled mouthpiece made of white clay.

Another one of Cox’s pieces, “Polyphonic Hush,” is made up of different tiny “mouths” coiled together.

Cox came up with the idea for “Polyphonic Hush” while watching President Trump speak on television and observing the facial expressions of all the senators. She said she felt her mouth clenching in reaction to what she saw on her television.

“It attempts to capture a personal reaction that is all encompassing and visceral,” Cox said.

Cox’s artwork has ignited shock, and even contradiction due to this unique exhibit.

“The visual representation of ‘Mouthpiece’ is quite literally a collective assembly of mouths biting their lips without voice or sound in frustration and angst,” Cox said.

Beth Ann Gerstein, executive director of AMOCA, further explained: “They decided to take a mold of her mouth so she’s swearing into the mold, in her frustration, and then made a mold of the mold.”

“Polyphonic Hush” is a never-ending coil with many mouthpieces attached.

Every time she would make a mold it shrunk, so she kept making more molds until she came up with the size she wanted. This resulted in several different versions of her mouth.

“As a Mexican myself, I’m pretty angry at him,” Chavez said. “(This art) sums up how all of us feel.”

While some people were driven to feel emotional about this piece, others like AMOCA volunteer Anthony Galindo admired its architectural structure.

“I like the way she described her architecture, the color pops out,” Galindo, a high school senior at Palomares Academy said. “Some sculptures I see are regular ceramics, but her structure is different.”

Museum store manager Gizel Avina said she liked the technique and the social and political messages of the art.

“It’s on the social and political climate … and how it works with the media,” Avina said. “I think it’s interesting how the work has small mouths and you don’t really notice until you really look at it.”

Cox said her work is a response to the ways the current political environment has challenged our ideals of freedom.

“Mouthpiece” will be at AMOCA through April 28.

Native birds perform in the garden
Best in show