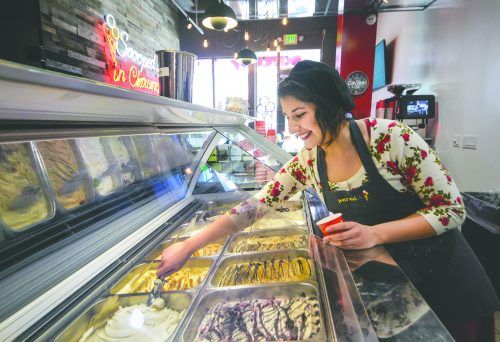 Alicia Rodriguez, ULV alumna and cashier at the Paradis Ice Cream Café in Claremont, scoops up fresh vanilla bean ice cream. The café, which opened in December, features ingredients imported from Denmark. The ice cream is made in the early morning at a product facility in San Fernando and delivered fresh before 11 a.m. daily, when the store opens. / photo by Dorothy Gartsman

Paradis is named after two Danish words: para and dis, that together mean “paradise ice cream.”

Today there are nine franchises in Southern California, the only place they can be found outside of Europe.

“Paradis has a really unique flavor,” said alumna Alicia Rodriguez, who has been working in the shop since their opening. “Everything is delivered fresh every morning.”

She added that the authentic Danish ice cream is a creamy mix between Italian gelato and American ice cream, made with state of the art Italian gelato machines, and only fresh ingredients.

“It’s a really nice place to take the kids after school,” said Caroline Medina, mother of two from Claremont. “I get to treat myself to some coffee and the kids love all the ice cream flavors. It’s a nice spot to relax at after a long day.”

The Claremont location creates lattes with artwork in the foam. Using steamed milk, they can personalize the art on top of the latte with any picture the customer wants.

Manager Keren Blout said a customer favorite is their warm danish served with your choice of ice cream inside.

They also serve traditional Flodeboller, which is a marshmallow covered in milk and dark chocolate.

Some other menu items include sundaes, floats, milkshakes, cold brew frappes, coffee and affogato, an ice cream dish with one scoop of ice cream covered in a rich espresso shot.

“The owners of Paradis originally worked in coffee so all of the coffees at Paradis are top quality beans brewed fresh everyday,” Blout said.

“I like that it is open a little bit later than the other shops in Claremont,” Harvey Mudd student Drea Conner said. “It’s a cool place to come get a coffee or ice cream.”

Paulina Wartman can be reached at paulina.wartman@laverne.edu.