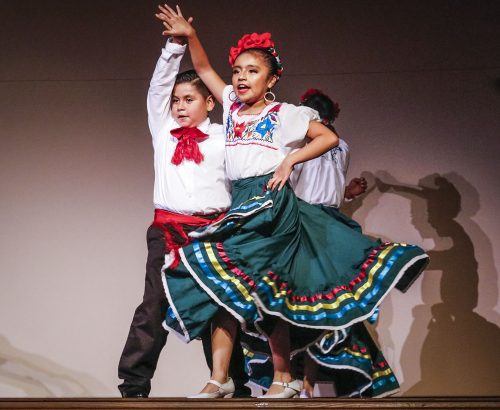 Fifth graders Lorena Salinas, 10, and Gustavo Albarran, 10, from Lincoln Elementary School in Pomona, dance at the For the Love of Arts Benefit Concert Saturday at Hillcrest Retirement Community in La Verne. The pair is part of an afterschool program created to help motivate students in academic areas and increase self-esteem. / photo by Katie Pyne

For the Love of Arts Benefit Concert, a silent auction and fundraiser put on by the Cultural Arts Society of La Verne, was held Saturday in the meeting house at the Hillcrest Retirement Community in La Verne.

More than 100 guests helped raise $3,100 for future art programs throughout the night.

The local talent included an after-school program performing Mexican folk dances, a men’s quartet, as well as a violinist, a pianist and a guitarist.

“It’s very important for inspiring artists to be promoting the arts,” Barbara Smythe, chairwoman of the Cultural Arts Society, said. “Having access to them at a rate you can afford brings the community together, and it enriches the community.”

The Cultural Arts Society is run under Hillcrest and is committed to making the arts more accessible in the community. They have been putting on four programs per season for the last eight years, which typically include young talent from within the community, or provide students with complimentary tickets to performances.

The benefit concert was used as a way to fundraise money to use for future events.

“If we can find wonderful performers who want to share their talent, we want to provide that.”

The first act of the night was an adolescent group performing Mexican folk dances they learned during their after-school program in Pomona, taught by ULV alumna Paula Rafael.

Rafael tries to get her students as involved in the arts as possible, so they can show off the dances they spend about two to three months on at a time.

“As long as we have availability we participate, especially around the community,” Rafael said. “Being part of the community is important because that’s where they’re being raised, so the community getting to see them is very important to me.”

The benefit concert was planned as a way to try and obtain funding for the next season, which is already being planned out.

Thomas said that the local talent comes out because they love to perform, but it is also a chance for them to showcase their talents.

“Having a large group of people created a very warm accepting environment, it was relaxed and inclusive and people had fun.”

The event had seven acts of local talent, with a brief intermission in between acts four and five.

“This is a wonderful facility and it’s filled with years of great art and singing, and all kinds of things,” Don Kendrick, mayor of La Verne, said. “Thank you very much for this evening of inspiration and joy.”

The last event of the season will be held at 3 p.m. April 22 in the meeting house at Hillcrest.

The Los Angeles Doctors Symphony Orchestra will perform and students are eligible for free tickets.