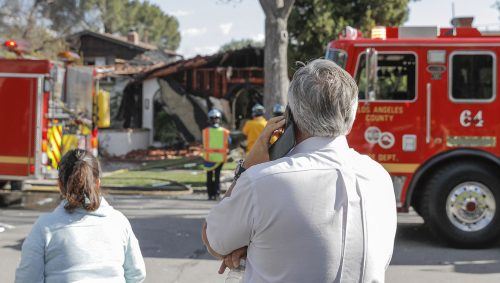 Firefighters inspect the remains of a house that exploded around 3 p.m., Monday, on the 200 block of 12th Street in Claremont. The explosion blew out windows in neighboring houses, and scattered roofing tiles into neighbor’s yards. The homeowner, Ron Podojil, was at his office at the time of the blast. “I have a place to stay tonight, but all I have to wear is what I have on me,” Podojil said. “I had everything in there.” Nobody was injured in the blast. The cause of the explosion remains unknown.

Claremont police and fire fighters are still investigating the cause of an explosion that tore apart a single family home Monday on the 200 block of W. 12th Street near the Claremont Village.

According to the Claremont Police Department’s public log, police received a call for a fire at 2:53 p.m. at this residence.

“I thought we were having a big earthquake,” said Nancy Goodman, who lives in the house next door and was home at the time of the explosion.

“That’s what it felt like. It was very loud, and I turned around and looked, and I saw smoke coming out of the house, and I noticed the roof was lifted, part of the tiles were lifted.”

No one was home at the time of explosion, and the blast caused no injuries.

Goodman said that she called police and then called Ron Podojil, the home owner.

Goodman said that police took her out of her home in case another explosion took place. She said it took the firefighters almost an hour to put the fire out, and they returned that night because there was still smoke coming from the house.

The roof was charred, and the framing of the home was exposed. By Wednesday, decorative tile from the roof still lay in piles on the roof and front yard, and bits of tile had also spilled onto Goodman’s roof.

University of La Verne President Devorah Lieberman, who lives close by, said she was not home at the time, but heard about it on the radio.

“I took a different route going home, because I always go down 12th Street, but I knew it was blocked off,” Lieberman said.

An official police report has not been released because the explosion is still under investigation, said Lauren Kessler, Claremont Police Department records clerk.