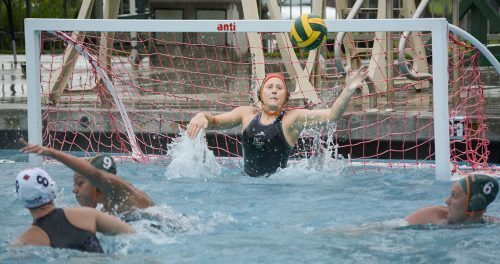 The Pioneers scored quickly one minute into the game.

The Leopards responded when freshman attacker Jassmine Kezman scored on a solo play at the 4:37 mark, tying the game, 1-1.

“I took some good shots during the game and my teammates did well setting me up for these shots,” Kezman said.

The Pioneers scored shortly after starting a 3-0 run before the end of the quarter, bringing the score to 4-1.

Two of the goals were made by East Bay’s standout freshman driver Adrien Van Dyke who would finish with four goals on the day.

Before the first quarter was over the Leopards scored by an assist from sophomore goalkeeper Shelby Garcia to junior attacker Emily Mena, making the score 4-2.

“I took some decent shots during the game. I could have done better to find other people for open shots,” Kezman said.

East Bay came out strong in the second quarter, shooting as many shots as they could, putting the La Verne goalie in a tough spot.

“Our team did a pretty good job on the defensive side with an exception of a few situations. We need to work on preventing counter attacks and I definitely need to work on blocking lob shots,” Garcia said.

The Pioneers passed the ball well around the pool, scoring three more times in the second quarter with no one from La Verne answering their shots.

With time ticking down before half time, Kezman scored two goals, both on assists from junior driver Victoria Mezack.

“I felt that I played well against them. In addition to my three assists, I was able to draw two exclusions and score a goal. It was a very physical game but we all played well together,” Mezack said.

The Leopards entered the half down 8-4 looking for a spark to get them back into the game.

The Pioneers came out in the third quarter once again taking shot after shot, scoring five consecutive goals. They held the Leopards scoreless in the third, putting them in a big hole heading into the final quarter, down 13-4.

La Verne started to turn the ball over and the goalie for the Pioneers was blocking every shot that was thrown at her.

“We will work on our flaws and be better prepared for the upcoming games. I am proud of my team and their hard work,” junior attacker Yuri Ujifusa said.

The Leopards scored two more times from Kezman and Mezack at the 4:38 and 3:24.

“For the Redlands game I hope to keep the opponents score low and be as focused as I was during the East Bay game,” Garcia said.

The Leopards bounced back by defeating Redlands, 6-5, Wednesday.

The win moves La Verne to 7-10 overall and 4-4 in the Southern California Intercollegiate Athletic Conference.

The Leopards will next host Virginia Military Institute at 11 a.m. Friday and Chapman at 11 a.m. Saturday.

Both games will be at the La Verne Aquatic Center.