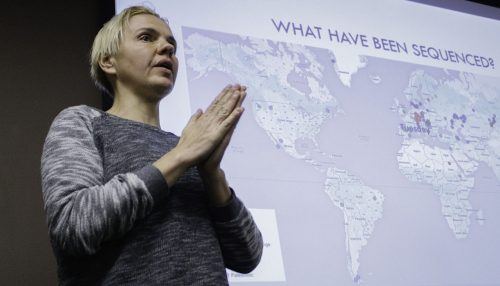 Tatiana Tatarinova, Fletcher Jones Endowed Chair in computational biology, explains the significance of digging graves to discover ancient bodies’ countries of origin to an audience of 37. She presented the lecture, “Bioinformatics for Fun, for History, and Everything else,” Tuesday in the President’s Dining Room. She talked about the Khazarian puzzle, or the idea that Khazars were converted to Judaism and subsequently diluted their culture. Tatarinova has found Khazar DNA in remains from eastern European countries. / photo by Tyler Evains

Roughly 40 students and faculty gathered in the President’s Dining Room for Tuesday’s faculty lecture, “Bioinformatics for Fun, for History, and Everything else,” by Tatiana Tatarinova, professor of computational biology, and one of two new Fletcher Jones endowed chairs in the department.

Tatarinova discussed her passion for studying DNA and how scientists research genetics as they evolve over time.

She talked about modern and ancient genomics and the field of molecular biology that focuses on the structure, function, evolution, and mapping of genes.

“Ancient DNA is degraded, Tatarinova said. “Samples are contaminated with bacteria, and there is also post-mortem modification of DNA sequence.”

“Development of sequencing (has) created an avalanche of data and opened doors to (researchers),” Tatarinova said.

She used a detailed PowerPoint to describe lactase persistence, which describes the continued existence of the lactase enzyme in adult mammals.

The lactase enzyme helps mammals digest lactose in milk. When species’ populations drastically change, it can result in a loss of lactase persistence, she said.

She showed charts and maps of lactase-persistent alleles and how they vary depending on where the species is distributed.

Tatarinova explained what would be crucial data by showing the audience graphs of the genomic sequence.

A chart showed where two genes represented by different colors matched up. She said that if they overlap that way, the data would be useless and unable to research.

She introduced some research on ancient Khazaria, a place of nomadic people yet surrounded by developmental advantages. Khazars originated in central Asia.

She explained how their culture dissipated as they adopted Judaism, Christianity, and Islam as well as the Hebrew and Slavic languages.

She said that Europe is the easiest place to collect ancient human DNA since grave digging is legal in the continent.

She added that teeth are the best remains to collect DNA from because bacteria in the mouth lives so long.

Since bacteria evolves so quickly, it is easy to tell what era someone’s remains are from just by testing enamel brushed off of a tooth.

Tatarinova also shared her fascination with studying the relationship between dogs and wolves. She said she is concerned that many dogs are ill because of inbreeding.

She said she has a dream to breed dogs back to health by cross breeding them with wolves.

“Wolves have about 60 percent of dogs’ DNA in them, so they’re not actually original wolves,” Tatarinova said. “So there should be no barrier for breeding.

Tatarinova said that the life expectancy should be longer than six years, she said that wolves should live unto 20 years.

Tatarinovna, who started at the University in fall 2017, said she hopes eventually to have a building here dedicated to the study of genetics.

“It was fascinating seeing how ancient DNA relates to ancestry,”said Elmeera Nosrati. “I’m a business major, but it was really interesting.”